I assembled a few samples of the newly released Wargames Factory 28mm Plastic cavalry last week.  In the French style, we have from left to right, a Grenadier a Cheval, line trooper and dragoon. 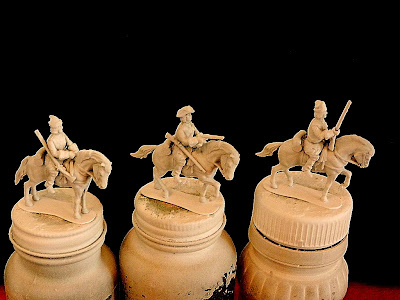 The box art looks good, a nice computer rendering on the front of the box and a few assembled but unpainted troopers on the side of the box. Definitely an improvement over the infantry boxes where the uneven quality of the collector painting might actually discourage off the shelf hobby shop purchases (if indeed there's any actual "brick-and-mortar" store sales volume).

The rider sprues give a variety of arms and heads, but whether or not you'd consider them a "good variety" depends upon what your expectations are.  The basic tricorne heads are fine, a couple very nice new ones and two others carried over from the infantry.  Aside from that, it looks like the sculptor cut a few corners but making all the others (in threes) identical - tricorne officer, Austrian/Bavarian cuirassier, horse grenadier and an oddball suitable only for French Grenadiers a Cheval de la Maison du Roi.  This latter I don't mind as I plan to use them for my imagi-nation foot grenadiers, but otherwise they're of very limited utility.  The torsos are rather basic but look serviceable enough.

The left hand for holding the reins is good, you get a variety of right hands, but I'm not terribly enthused over the pose of the sword. Would have much rather seen it in the "present" position held upright back at the shoulder than with the arm outstretched in the "hell for leather" charge posture. And I'm not visualizing any way to fix that with the parts on hand.  I really wish WF had made a torso as a one piece casting with the right arm holding the sword in desired position. Oh, well. The rider's body, once you get it assembled, pops easily and securely onto the saddle.

The horses aren't bad.  The two halves snap togther with little visible seam and the tail assembly is a clever bit with a smallish disc shape at the base which holds the tail firmly in place once you glue the halves together.  Although I would have preferred one or two of the tails hanging at rest for the standing horse position.  The neck/head assemblies are a bit disappointing, there's a noticable seam where the neck glues to the body and the mane comes up short, leaving a somewhat unsightly gap. The other thing I don't like, three of the four heads are turning left or right, the only head facing straight ahead is on the extended neck (galloping pose).  There aren't many different gaits on the sprue but you can mix and match the left/right bodies to create some different looks. To my eyes, the horses look a bit weak in the hind quarters, but I think this is party an optical illusion created by the somewhat oversized cloak rolls.

For people who complain the infantry assembly is fiddly: "you ain't seen nothin' yet".  They'll be hating life once they start gluing these bad boys together. As for the bases, hope you like your cavalry at 25mm spacings. With these particular figures, I don't.  The bases in the photo are my own, made from sheet styrene, thin enough to cut easily with scissors. As the hoofs aren't pegged in any way (and indeed the various gaits probably preclude it),  I wonder about the potential frequency of horses getting knocked off their bases when being handled or transported.

In the next post, I will show these examples as painted.
Posted by Corporal_Trim at 5:16 PM