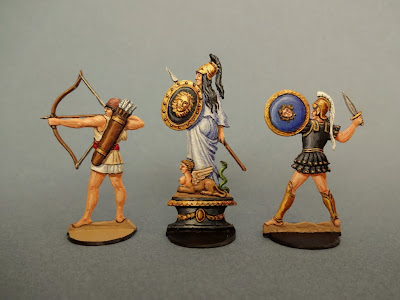 Finished the first few figures of the Greeks, an archer pawn, Athena and her favorite hero Diomedes, attired in his sword & sandal movie armor.

And posed in their element. 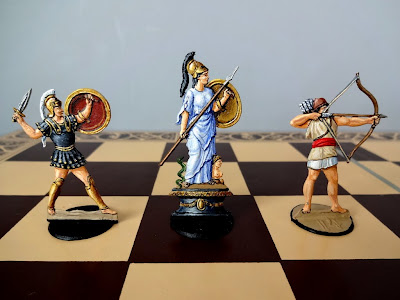 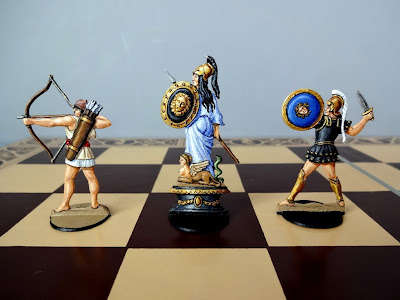 Working on the next group now, Menelaus, Poseidon and another pawn. 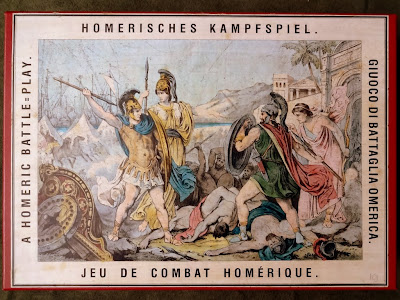 Here's something I just received from Germany yesterday, an old kid's game: Homerisches Kampfspiel. This set was produced by Heinrichsen in 1881.  The figures are 40mm, representing gods and heroes of the Trojan Wars. At least the 19th Century idea of it, not a boar's tusk helmet or figure-eight shield in sight here.

It's funny, I had contacted Dr.Grobe of Heinrichsen about something completely different, threw in a question about this set thinking it was long out of stock, and was pleasantly surprised to find she still had one with the unpainted castings.  My eBay Romans had fetched a nice sum, more than enough rationalize getting the game.

The components are nice, with a sturdy 9x9 board and two trays of  beautifully engraved figures. 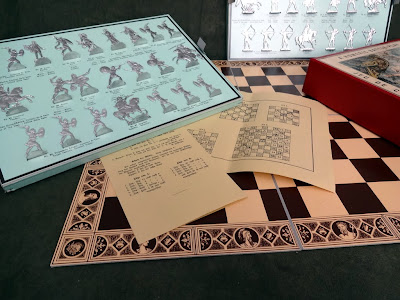 The rules for the game are chesslike, rather simple and minimalist, but somewhat murky at the same time. Perhaps something is lost in translation.  Each side has 23 figures: 5 gods and goddesses, 8 heroes (3 mounted, 5 on foot) and ten warriors serving as pawns.

Capture is only on the diagonal.  The pawns move like chess kings, the foot heroes move as the pawns do except cannot retreat. One wonders what happens when they reach the other edge of the board, presumably stuck there like players on the old electric football games who vibrated to the sidelines and end zones, out of the action until the next play.  The interesting wrinkle is that the foot heroes all have a patron god or goddess, identified by like color codes painted on the bases. These gods can then fly across the battlefield to protect their heroes from capture (at least from one side). The mounted heroes enjoy no such protection but are nicely compensated by the granting of unlimited movement on the diagonals, like chess bishops.  When a hero dies, his godly protector is removed from play, no doubt retiring to Mt. Olympos. When all heroes to a given side are killed, that army is defeated and the game is over.

Here are the game pieces, shown in their factory paint.

I look forward to painting these in my own way, as soon as I finish a few other things in queue.
Posted by Corporal_Trim at 10:39 AM 6 comments: 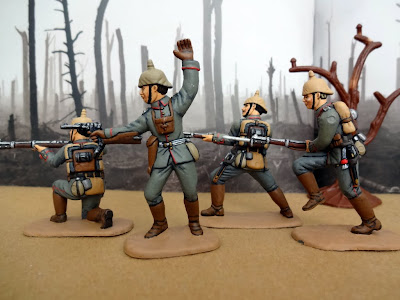 There comes a time in everyone's hobby life when you have to face limitations: sometimes financial, sometimes in available space, or just flat out realizing that you can't collect everything.  So it goes with me.  I've always had a rather haphazard approach, collecting this and that as the enthusiasms for different periods have waxed and waned.  But I'm over 60 now and have to face the music. If I never bought another figure, I'm not going to live long enough to paint all this stuff, even if I retired tomorrow and worked at it 8 hours a day.

So, time to move on and divest myself of things that, to be realistic, I'll never do enough with to warrant hanging onto boxes of figures.  First, I sold the 54mm metal Romans on eBay, with a pleasingly healthy bump to the Paypal coffers.  Now it's time for WW1 to go. Fortunately, I never went hog-wild with these, having just the one box each of AIP French and Germans. It was fun test-painting the several figures shown here, duly documented and soon off to someone else who may like them.  After that, WW2.  Once these are gone, my 54mm activity will be restricted to the Ancients (on hold for now but my wife likes these) and will actively continue to collect and paint Medieval knights. 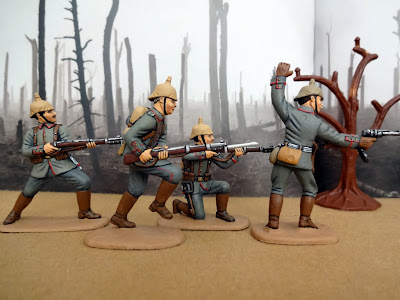 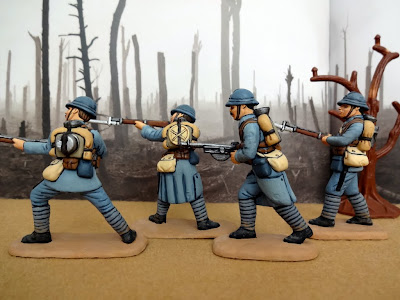 Today's post is # 100, a milestone of sorts. So thanks to everyone for your continued encouraging support of my wandering path through the world of miniatures, both flat and round.
Posted by Corporal_Trim at 9:33 AM 7 comments: