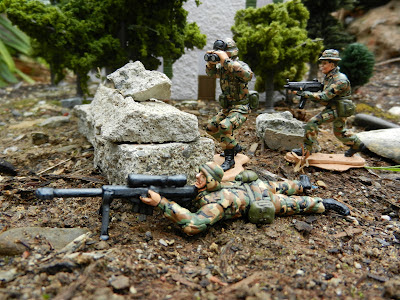 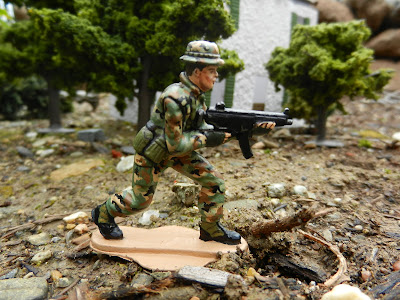 Recently I looked into Brickarms, the miniature weapons line designed for Lego minifigs.  I have little interest in collecting Lego figurines and doubt that I would have at 7 years old either, had something like that even existed back in the 1950's.  Aesthetically, they just don't appeal to me.  The weapons do, however.  Chunky in proportions but capturing the essence of the real thing. 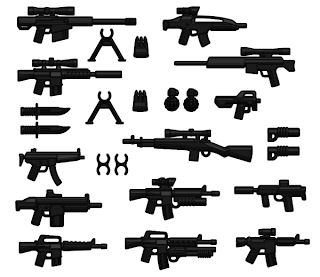 http://www.brickarms.com/
I wasn't sure about how they'd suit 54mm, 1/32 plastic figures, but ordered some examples to find out.  The idea was to test how they'd work out using cheap clone soldiers as the guinea pigs for conversion.

Let's see what we've got here.  First up, our subject comes from Toy Soldiers Depot, "Modern Plastic Figure Set #2".  These are US-styled troops, something of a mixed bag in scale and style but plenty of useful guys in this set. The Combat Storm rules specify MP5's for Special Forces squads, so here goes the first attempt:


Next up, TSD's bizarre set "Modern Style Rambo "Punk" Soldiers. What you get here is 50 guys in 5 different poses, molded in green and gray plastic. The sculpting varies from decent to comically bad, often on the same figure.   But, at 10 cents per man, not a huge investment. 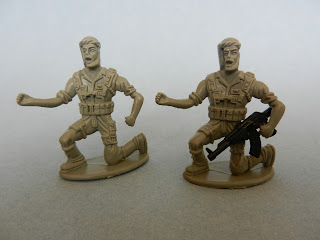 Okay, how did I do here ?  While somewhat oversized, the Brickarms didn't turn out too bad. Particularly as the Rambo figures are cartoonish anyway.  I used Green Stuff (my first experience with it) to build their hands around the weapons and bulk up certain areas of the figures. The beret conversion on the Mohawk guy wasn't a success, his head is rather oversized to begin with and what I did just accentuated the flaw.

And the final result: 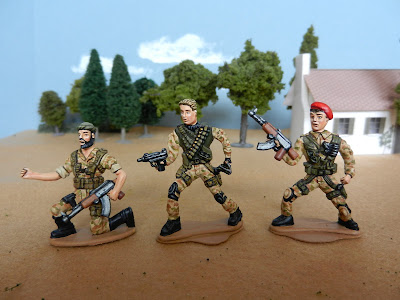 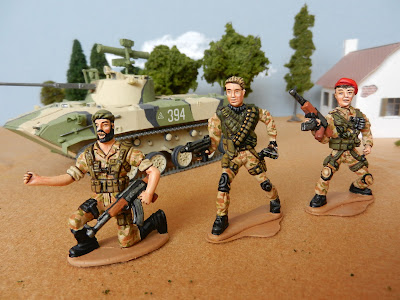 All in all, I think the result is satisfactory. I'll be able to make an acceptable squad of Tan Army soldiers out of these.
Posted by Corporal_Trim at 10:59 AM 9 comments:

Finally finished the unit of HWG-Modelle Austro-Hungarian hussars.  And, I have gotten more information about the mysterious HWG-Modelle company, courtesy of Wollner expert Robert Lonsing.  He writes:

HWG-Modelle has nothing to do with Wollner/Kober, there is definitely no connection. HWG-Modelle was or is a consolidation of two manufacturer only for the purpose of better selling:

- Erich Kollenz: HWG-Design started in the 1970's (mainly guns and limbers through all ages) and
- Josef Sichard, Vienna: pewterer and tin-founder since 1825
Your purchases are definitely no Wollner- but Josef Sichard-castings from old moulds (bought in addition about 1880-1900).
My thanks to Herr Lonsing for his help in solving the origin of these castings. Without further preamble, here are the figures (painted in acrylics, sprayed with two coats of gloss). 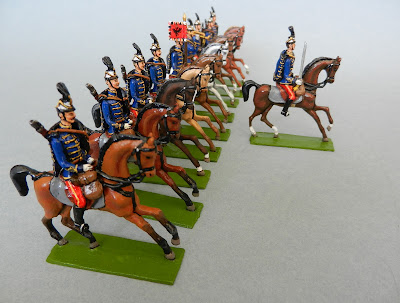 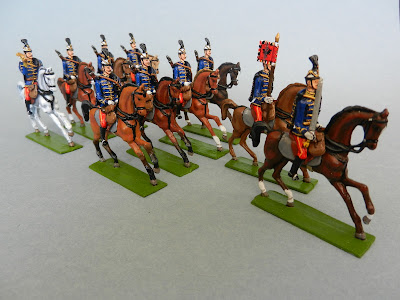 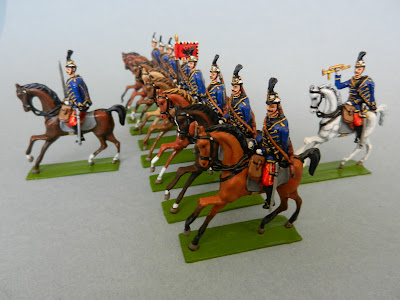 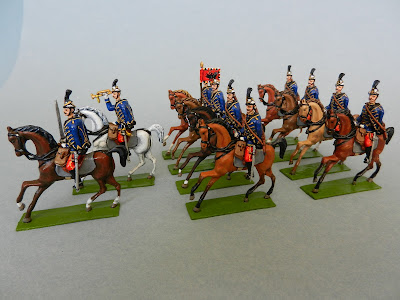 Here's a one-off in terms of scale and subject matter. This is one of the older battleships in the Russian Black Sea fleet, the Dvienadtsat Apostolov.  This 8700 ton 2nd Class battleship was launched in 1890, this photo shows her in with the 12" main battery in the original barbette configuration.

I have modeled the ship in somewhat later trim ca. 1900 with the barbettes covered with armored shields.  Sorry, no work in progress pictures but it's in my usual composite construction method.  I used the 1/800 plan from "Warships of the Imperial Russian Navy: Volume I - Battleships", an old book published in 1968, written by V.M. Tomitch.  This 102 page paperback is well worth a purchase if you can find it anywhere. The plans are excellent, with a top down and profile view of each ship - all you need really. 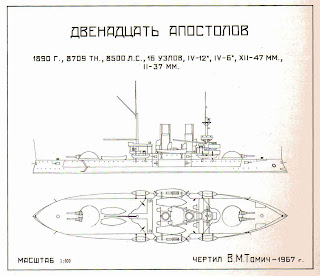 I cut the tops of toy figure game tokens to make the turret domes. Other than that, it was a relatively straightforward build process. 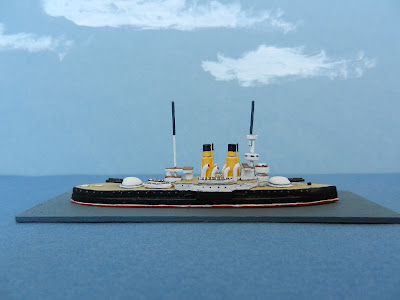 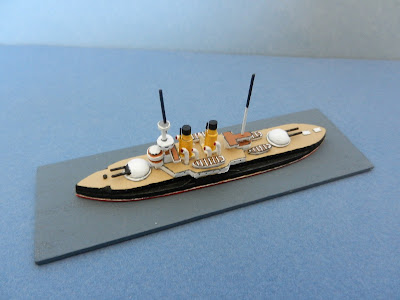 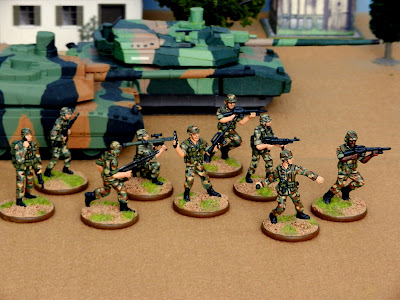 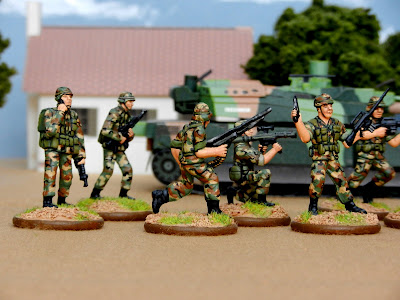 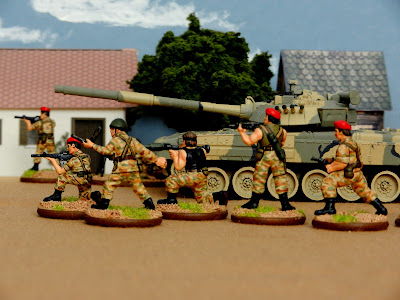 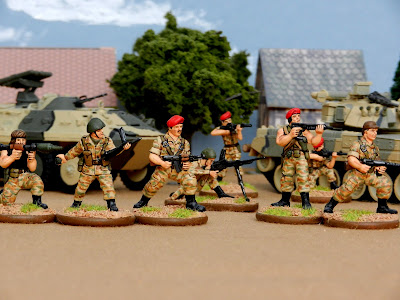 Where am I going with these ? Nowhere really. It was a fun exercise but when I get back to building squads for Combat Storm, it will be with the 1/35 - 54mm plastics. There's just more available. For me, part of the fun of playing with army men is the personality of the larger figures.  I've also picked up a few sample Brickarms weapons (intended for Lego minifigs) to convert US weapon-toting soldiers to bad guys. They're quite good, wasn't sure about the scale and consequently didn't get too many. But now that I have them in hand, for the larger 54mm figures I think they'll make for some nice conversions.
Posted by Corporal_Trim at 8:16 AM 6 comments: