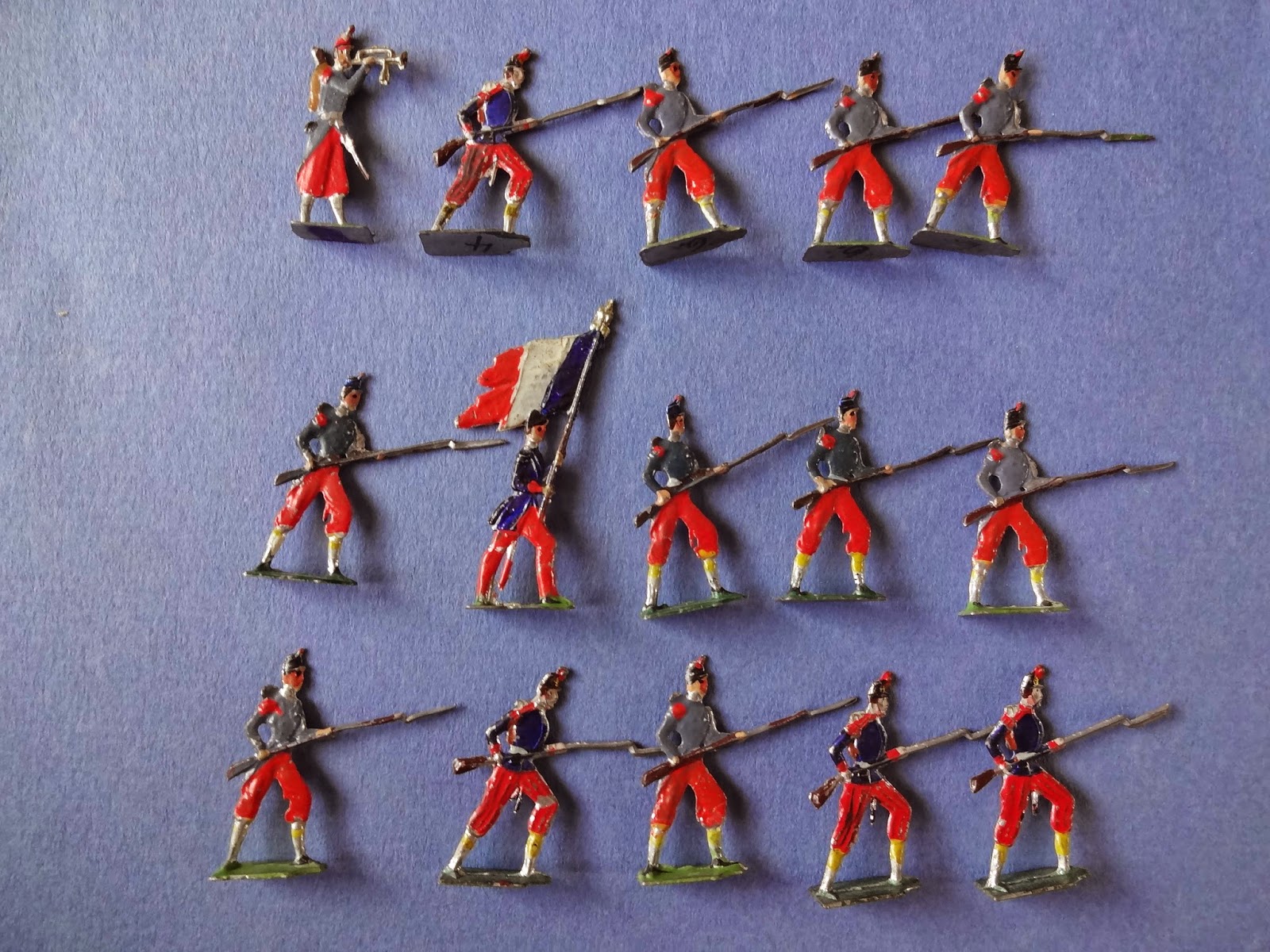 The Risorgimento or Italian wars of 1848-1866 have been of interest to me for several years now, since first reading about these battles of which I had previously known nothing virtually nothing.  I've been looking for flats depicting this era off and on and the pickings seem to be slim when it comes to figures currently in production. However, the antique flats do appear on eBay and the Berliner Zinnfiguren Flea Market from time to time.

That's how I acquired this old set of French infantry.  Actually it took about 3 purchases of smaller groups to scrape together a minimal battalion of 21 foot plus a mounted commander.  As you can see in the first photo, the factory paint has seen better days. As indeed you'd expect given that the figures were probably produced when battles like Solferino were current news.

First of all they are small: 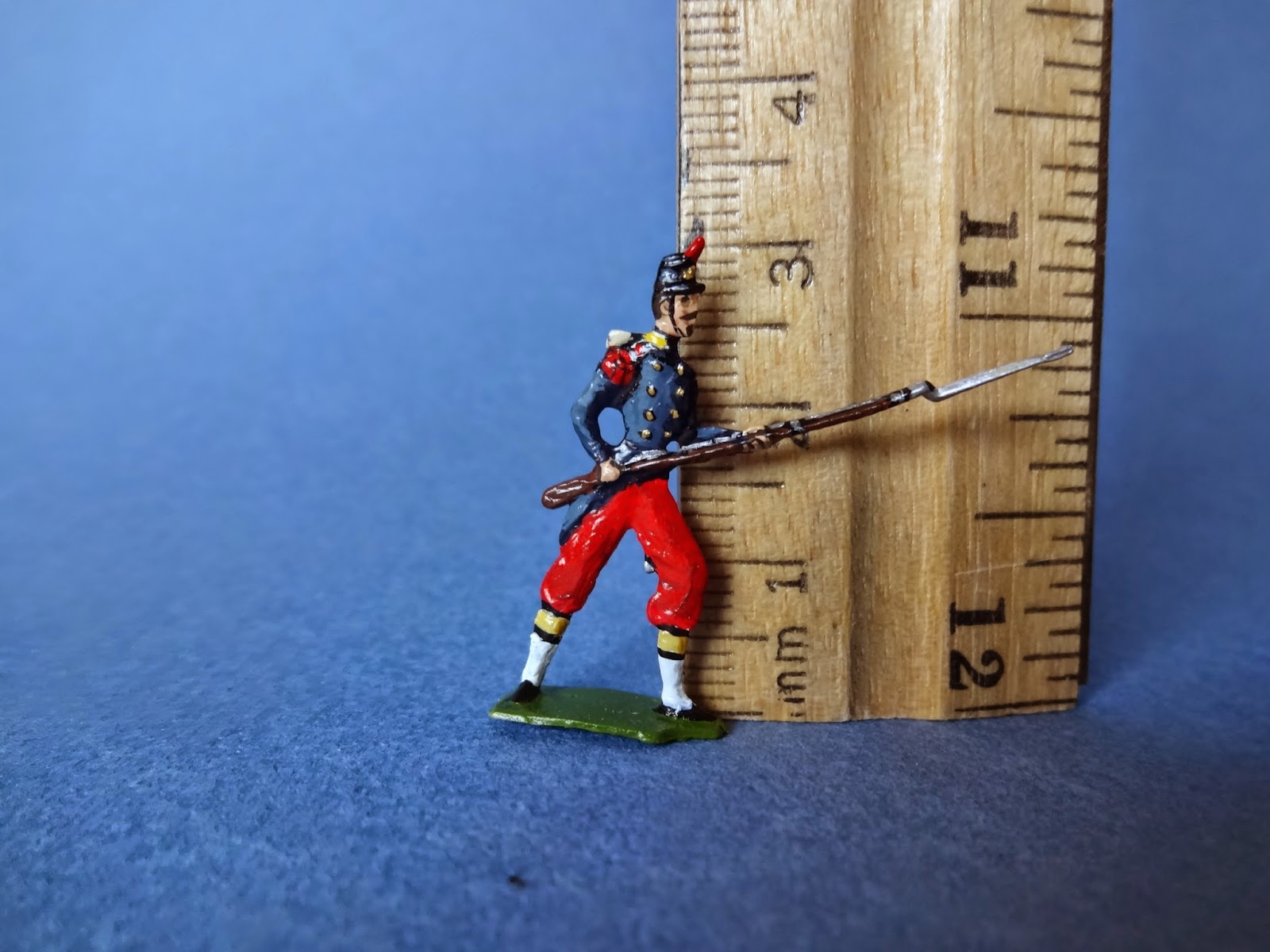 Nor have even the Germans been entirely consistent in scale over the years.  From left to right, old Heinrichsen 28mm & 30mm, Keiler, Rieche Brothers. 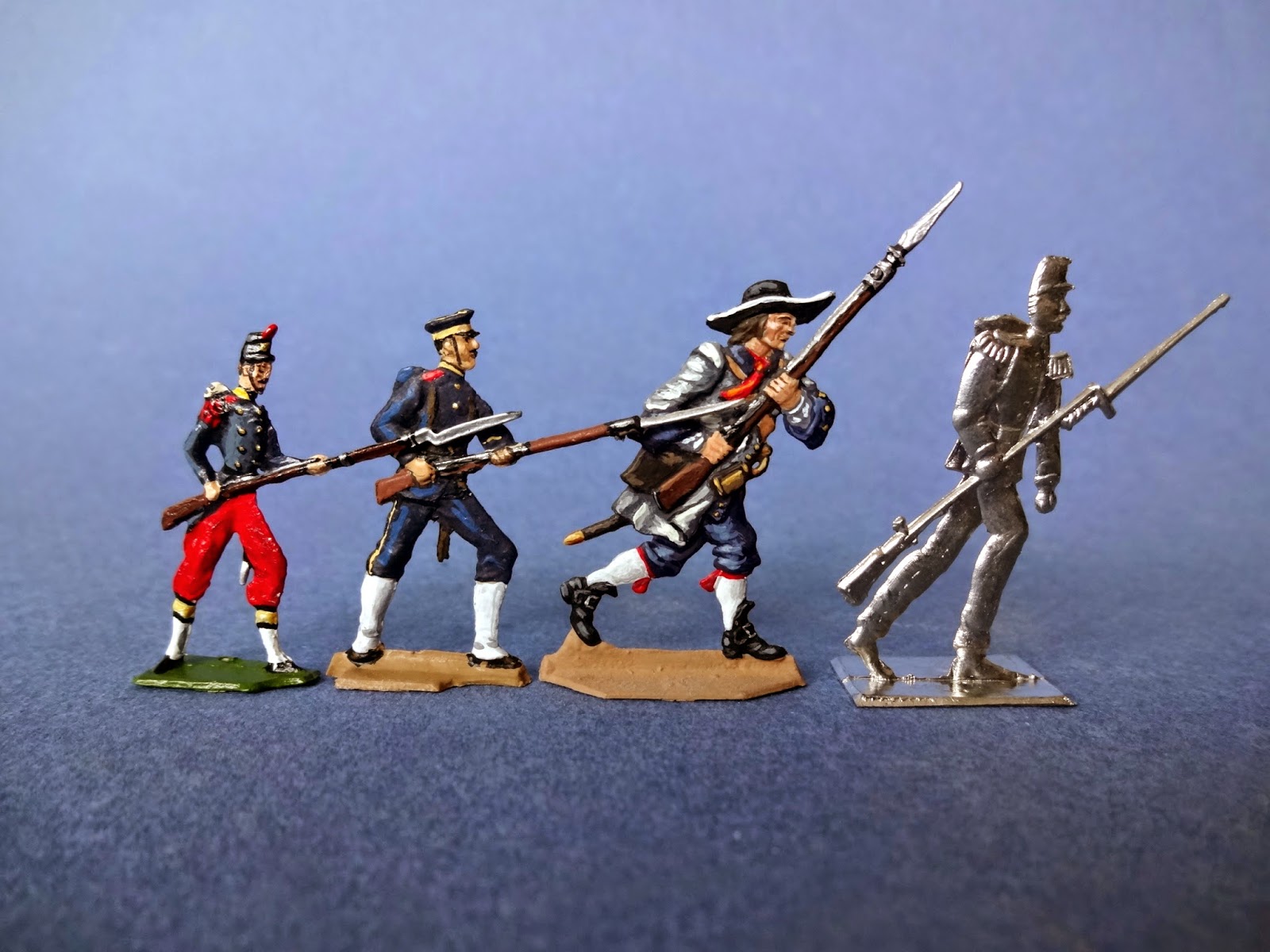 How do they look when stripped and repainted ?  Not too bad, I think.  Somewhat crude compared to the newer flats but they do appeal.  As you can see, the pose is the same but the men in overcoats are executed in a different style from the guys in tunics.  Judging by the shakos, they predate the Franco-Prussian wars. 2nd Empire experts can help me out here, but I'm guessing ca. 1855-1860 is about right. 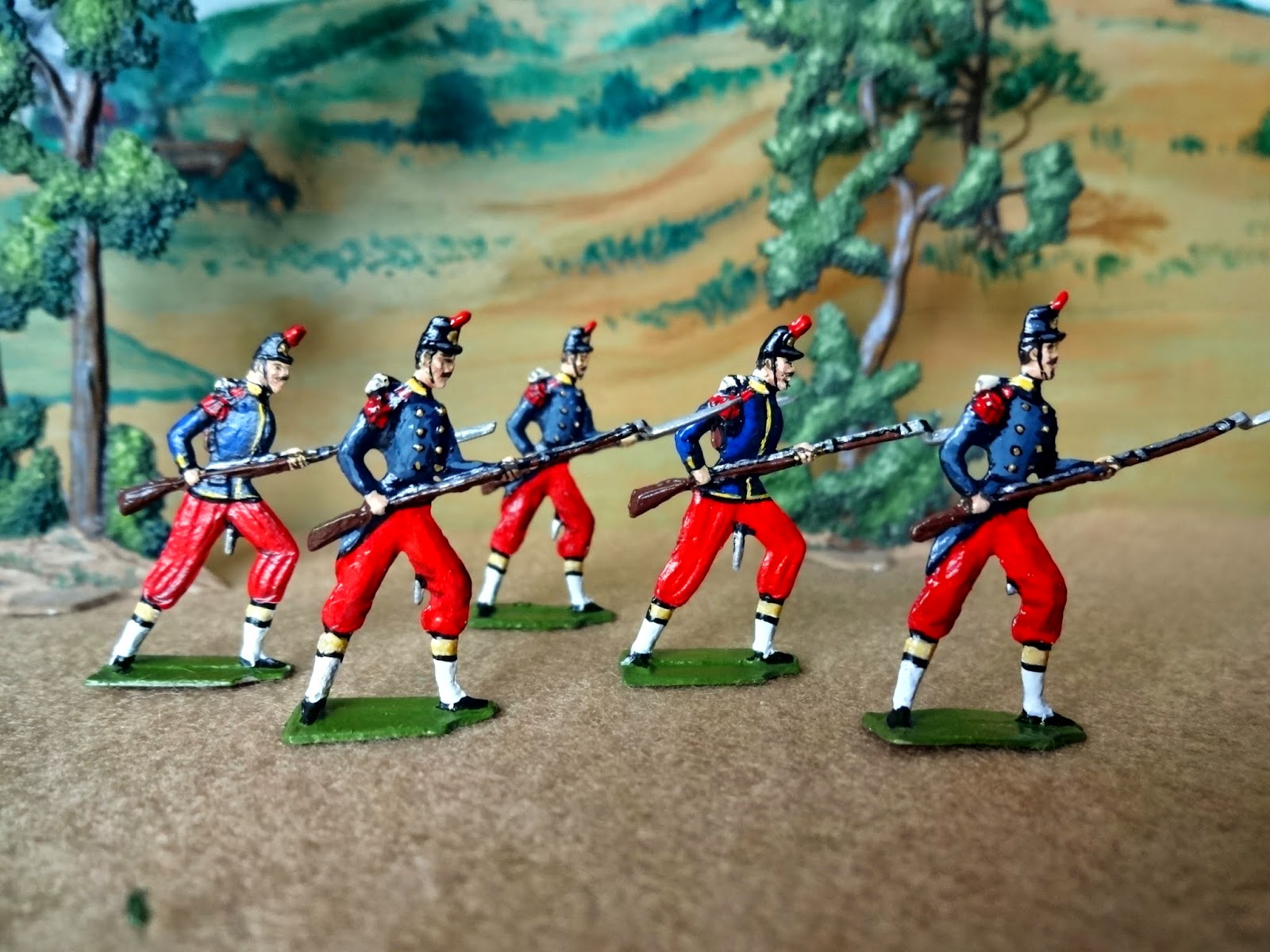 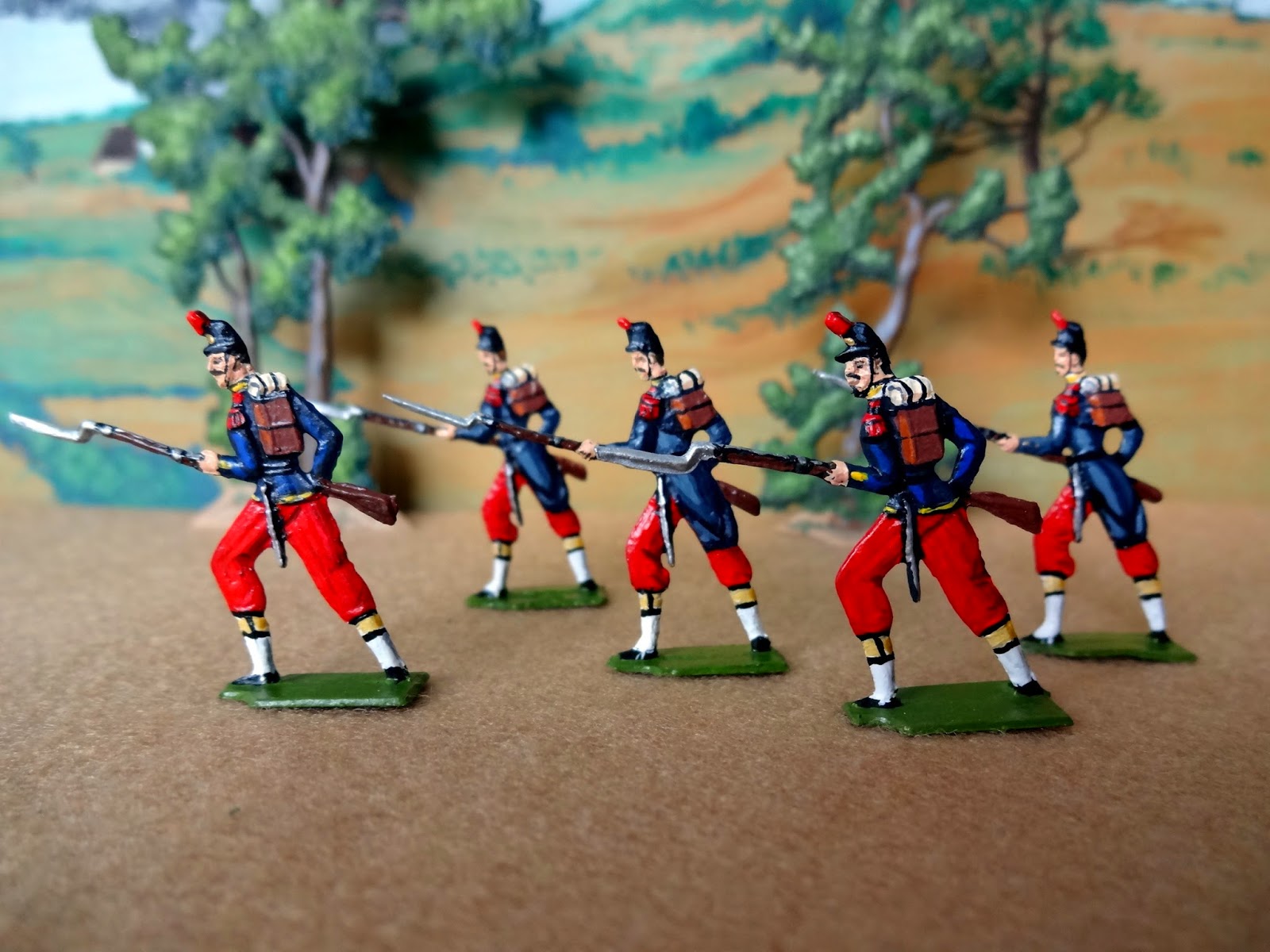 And on the plus side, their simplicity and diminutive size makes them the fairly easy to paint.  I'm painting them five at a time in assembly line fashion and should finish the battalion within three weeks. 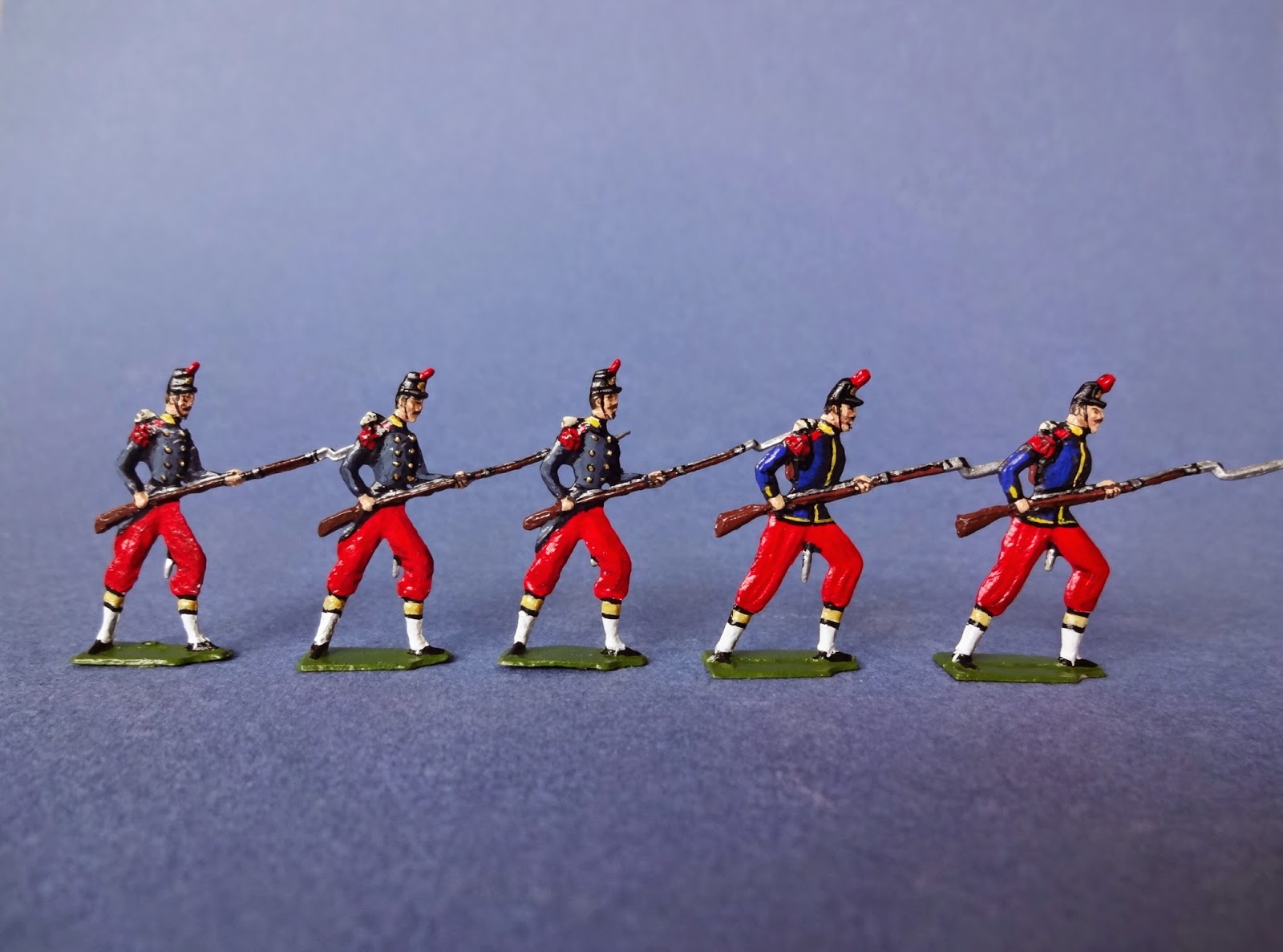 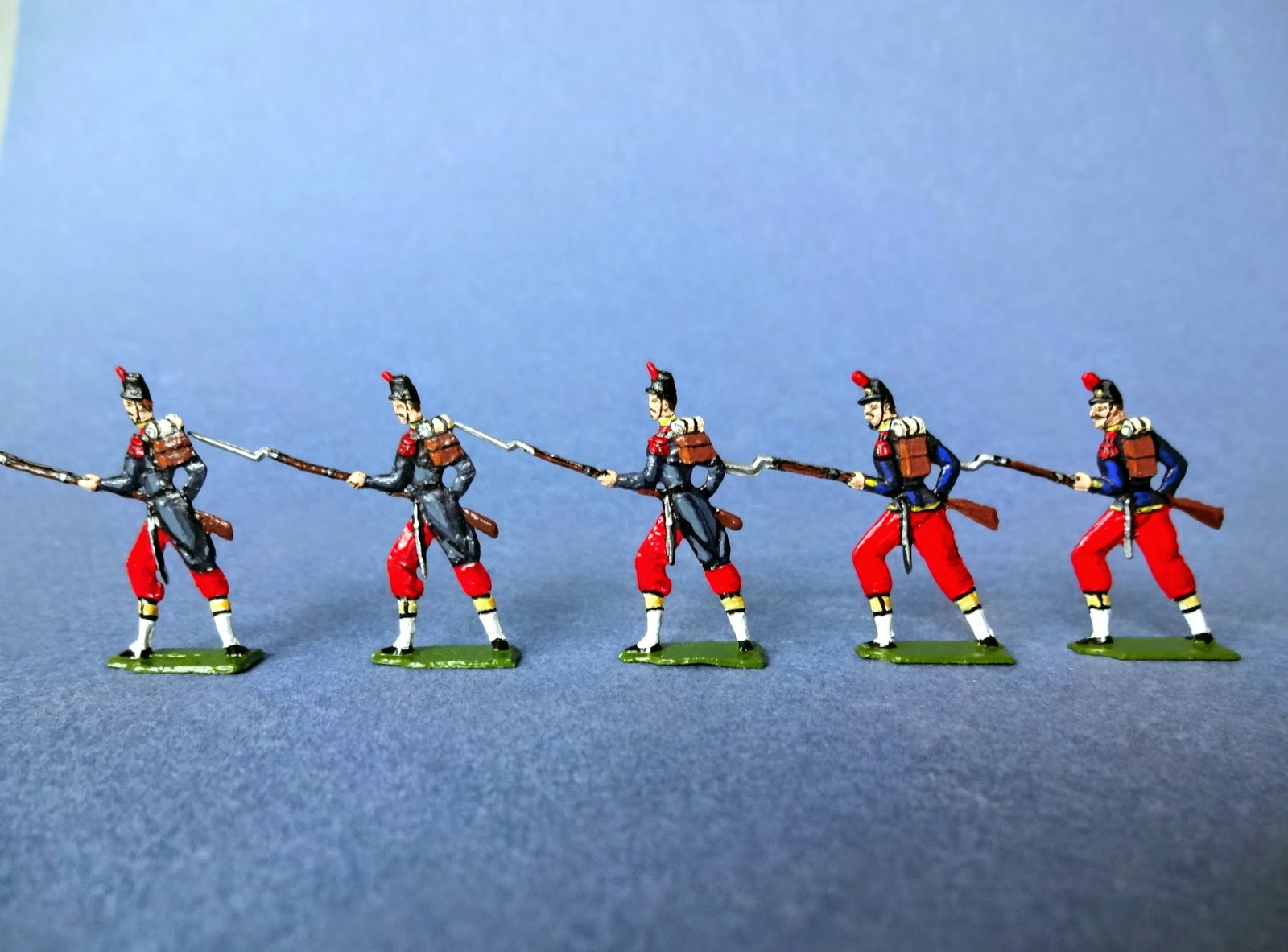 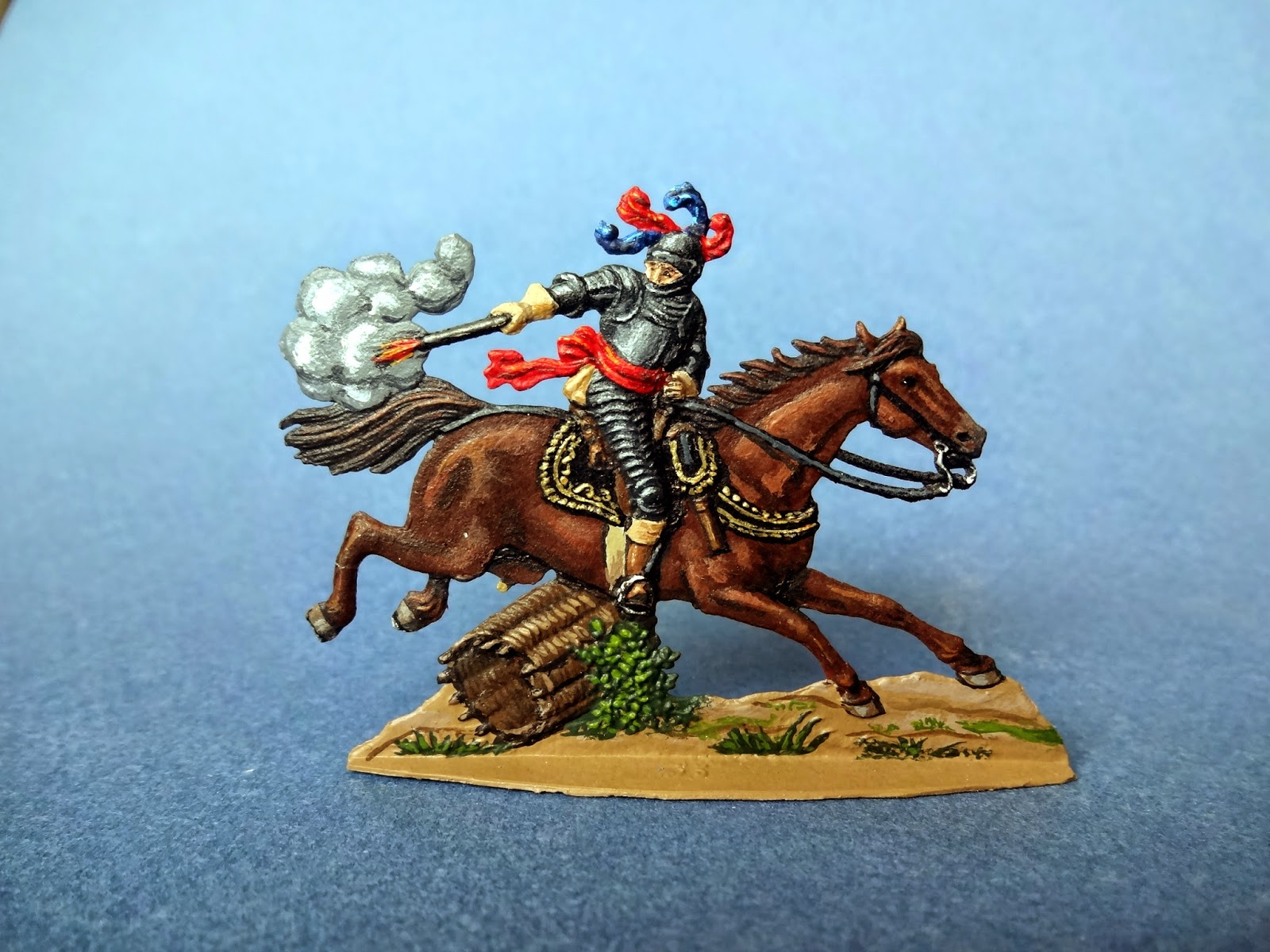 After an exceptionally long hiatus, I'm pleased to report that I'm painting again.  If there are actually any followers left, I salute your patience.

A few examples to start out.  First, the other side of the 30 Years War reiter.  This is actually the companion figure to the other of Gustavus Adolphus getting shot out of the saddle at the Battle of Lutzen.  He is part of the Heinricshen set Der 30-jährige Krieg, produced in 1883.  These are nominally 40mm, but more precisely they are 35mm. 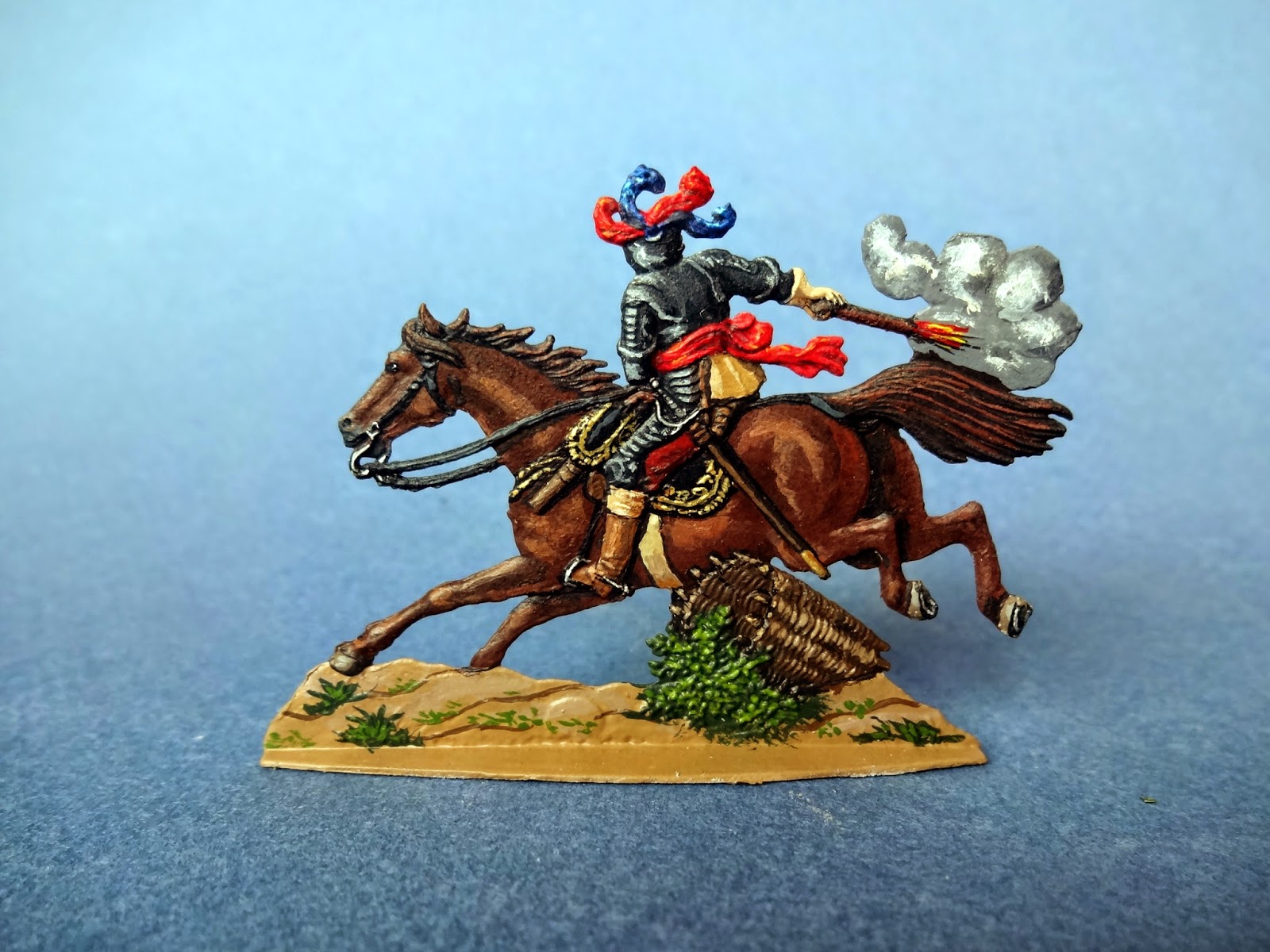 And a few of the Heinrichsn 45mm Ottoman infantry of 1877.  The originals were issued at about this time. 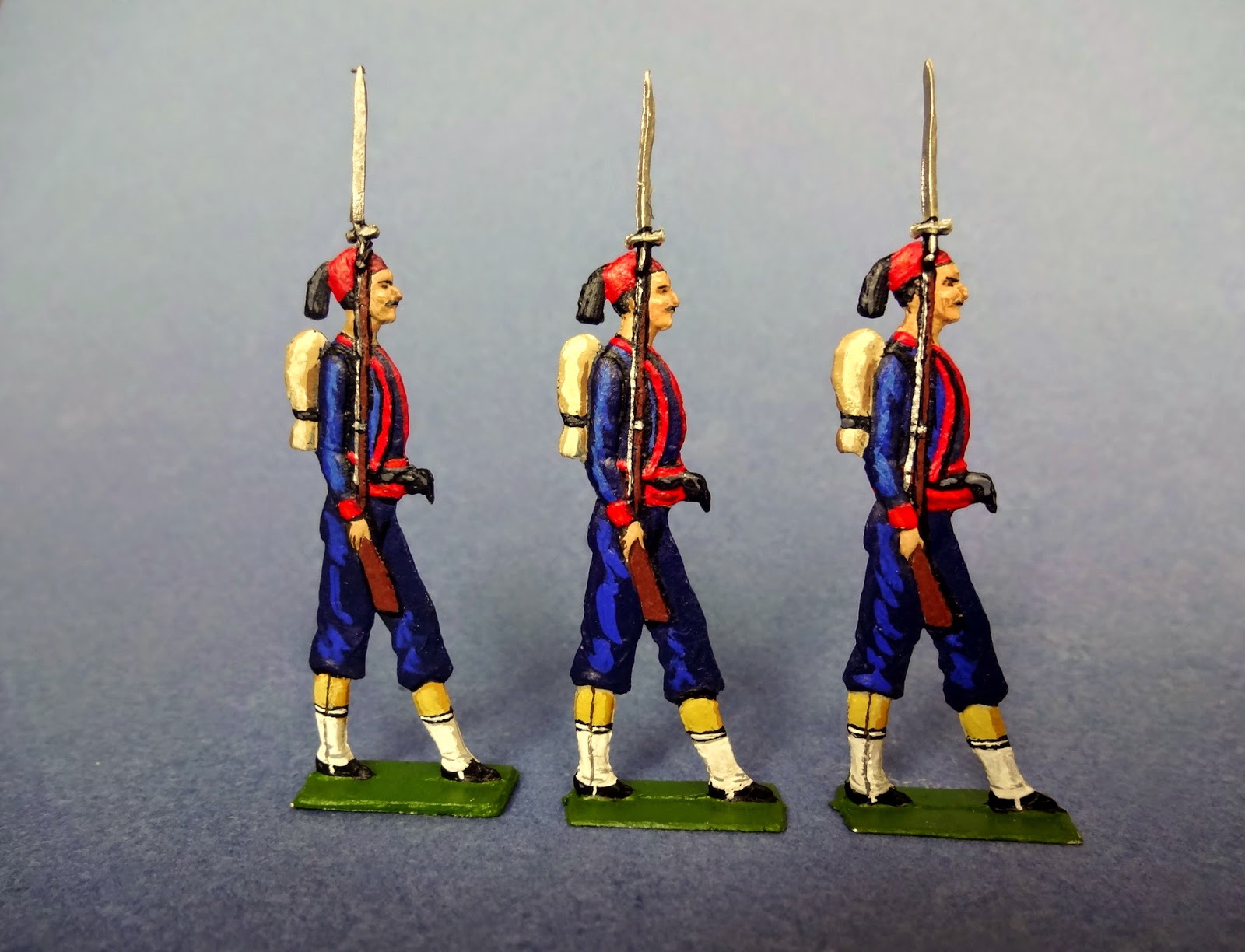 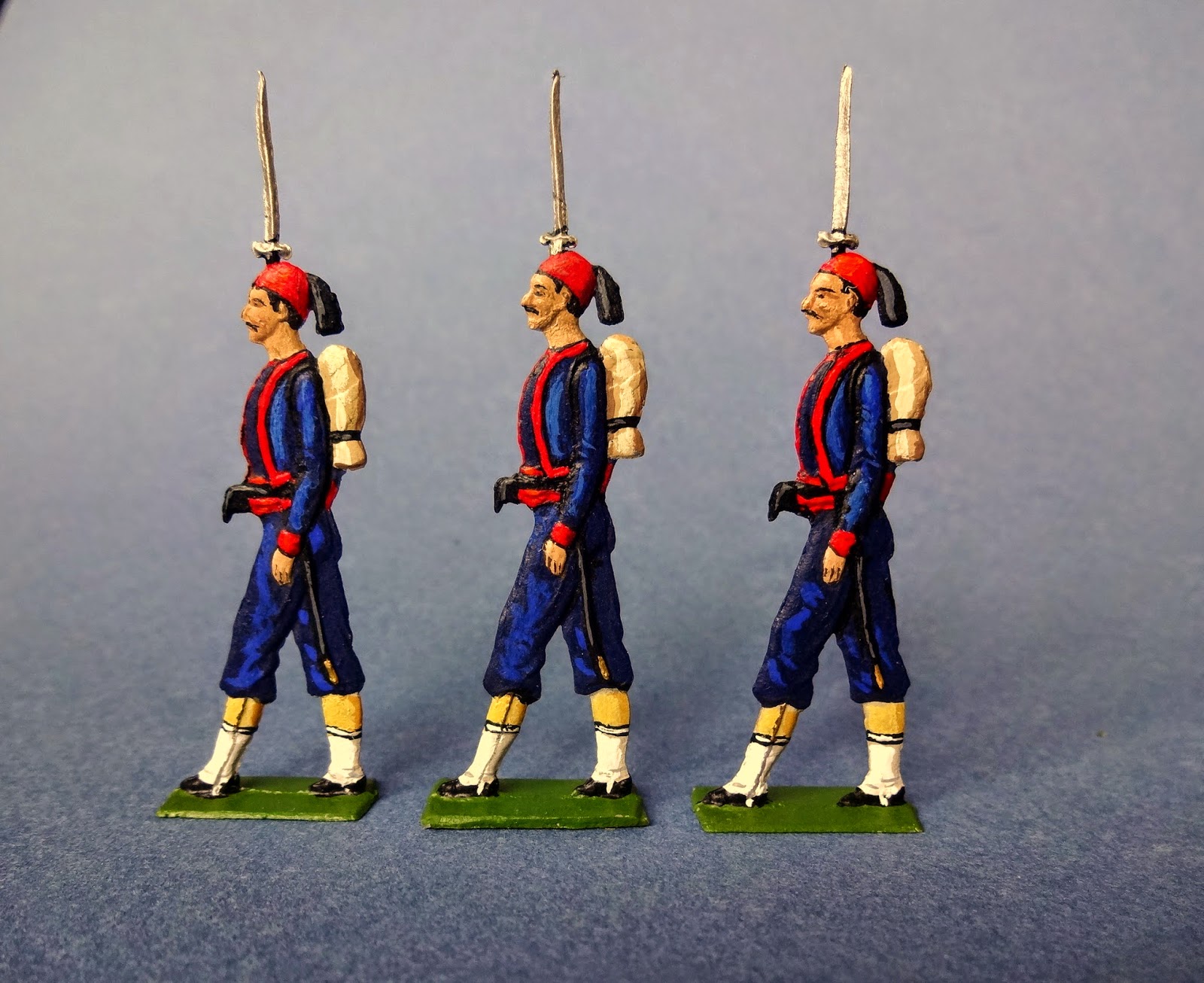 And now just a couple years short of retirement, I've had to put some thought into what I collect and what must be trimmed.  As my wife and I will most likely be downsizing our living accomodations considerably, I think it's practical to assume that just about everything will have to go except for the flats.  So I'm painting those for now, the figures shown here with no particular project in mind but just to get the juices flowing again.  And I promise not to wait 6 months for the next post.
Posted by Corporal_Trim at 2:02 PM 21 comments: