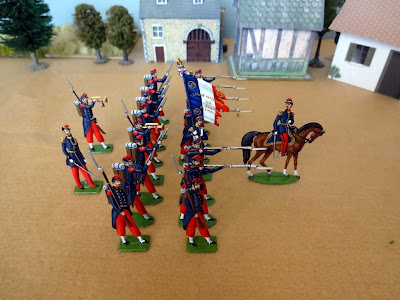 Finished the French infantry set. I'd have been just as happy to have all the poses like the two figures in the foreground, particularly instead of in the firing position.  Certainly if the CO valued his life he wouldn't be out front with his men blazing away. But this is what I had to work with and I'm happy with them. 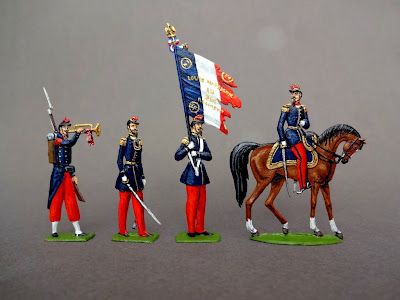 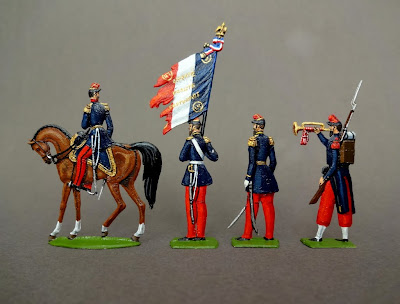 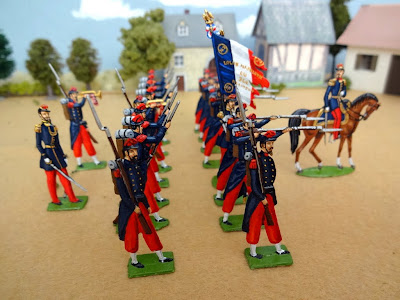 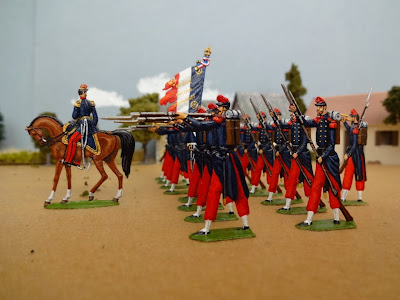 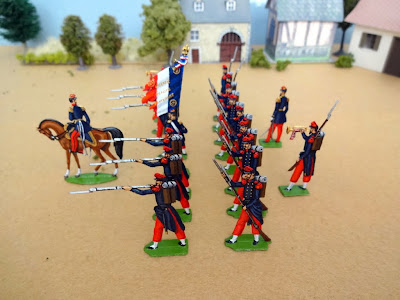 No sign of the Scad molds yet. Cause for concern but not time to give them up as lost yet.  The teaser was the mail carrier ringing the doorbell yesterday afternoon, indicative of a package requiring delivery confirmation. Turned out to be a registered letter for my wife, grrrr.  Anyway, I do expect them to arrive this week and in the meantime I certainly don't lack for things to paint.
Posted by Corporal_Trim at 9:55 AM 7 comments: 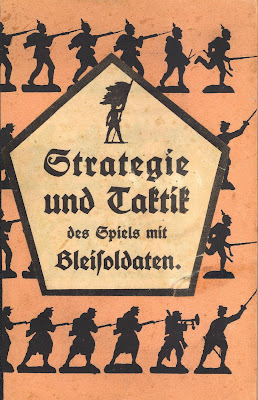 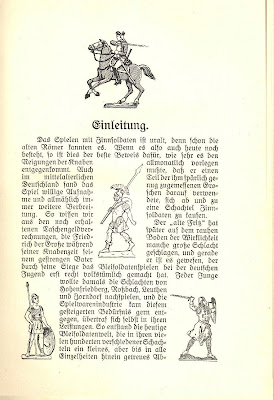 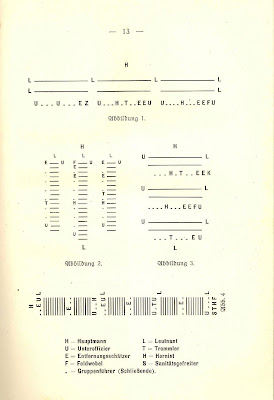 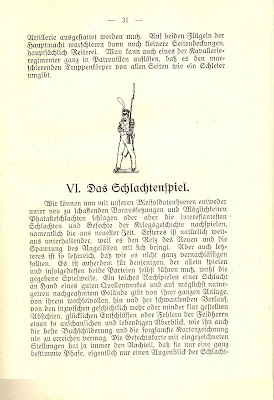 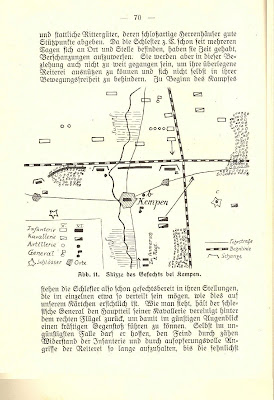 Oddly enough, Strategie und Taktik dates to 1917.  I have to share Mr. Wloka's puzzlement about the timing, publishing a book about playing wargames with tin soldiers in a Germany suffering from blockade and beaten down by three years of horrendous casualty lists. He puts it rather well, "Perhaps this work is also just a good indication of how little real war - contrary to the opinions of the war-game opponents - has actually to do with the Zinnsoldatenspiel."
Posted by Corporal_Trim at 1:34 PM 6 comments: 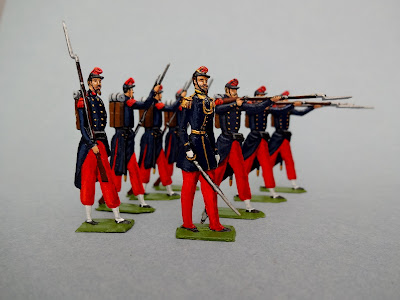 Been making steady progress on set # 4077 despite higher than average amounts of yard work & household repairs, kid's parties on the weekend and income tax filings. I've actually finished a dozen but the last four are in the queue for final coating.  So I'm pretty confident of wrapping up the whole formation before the end of the month. 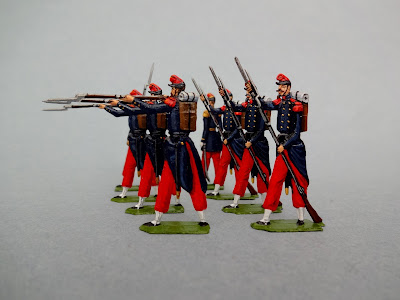 What's next ?  I'm going to keep going for a while on the Franco-Prussian War in 40mm toy soldier style, using flats and semi-rounds as much as possible. I got a good deal on several SCAD molds on German eBay last week, should have these four molds in hand before too long and will report on how the casting goes. 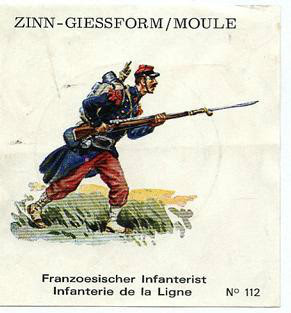 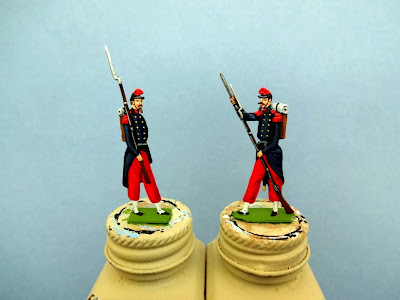 For some reason I had a strong temptation over the weekend to bring out a few of these figures which had been primered and sitting in the queue since getting the set last year. These are Heinrichsen's set # 4077 - Fronzosische Infanterie im Feuer, a relatively recent re-issue in 2011.  The set contains 20 figures: mounted officer and three other command, 16 infantrymen in three poses.

The designs date to 1860, per the listing supposed to be French line infantry ca.1850, but I think the kepis date them a bit later. Probably contemporary with the date of issue but suitable for the mid-19th Century to the Franco-Prussian war. They're smallish 40mm, a few millimeters shorter than Prince August for example, and obviously slender.

I wasn't so enamored of the stylized old-fashioned designs as castings, but with paint on them, I quite like them. Simple and easy to paint too, I did four of these guys pretty quickly so the whole unit could reasonably be done in a month or so. I'm thinking of gloss coating to match the semi-rounds.  I also have a nice set of Chasseurs a Cheval, contemporary with these.
Posted by Corporal_Trim at 11:29 AM 2 comments: 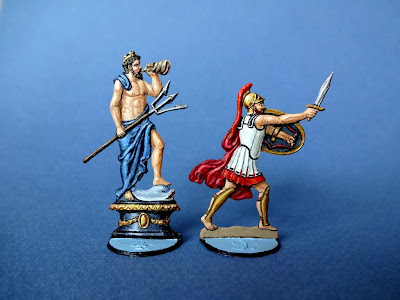 Just finished these (plus another pawn), the Spartan king Menelaos and his godly protector Poseidon. As always, painted in acrylics.  The bases of all the paired gods and heroes are color coded to facilitate identification for the players.

And in their proper element, on the game board.  Interesting that Menelaos is classically Greek but his shield design is Roman legionary in style.  In general, I dislike raised shield designs for hoplites as well as raised herarldy for knights as it really limits their utility for representing anything beyond the one figure. But for these more symbolic figures, it's just fine and makes them easier to paint. 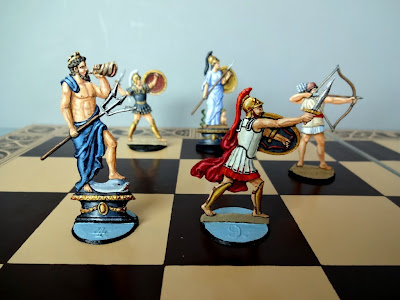 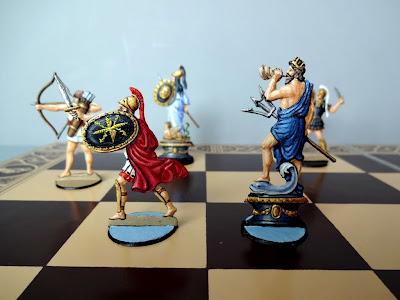 Now working on the mounted figure of Patroclus, then on to Odysseus and Hermes.
Posted by Corporal_Trim at 10:58 AM 5 comments: