I have to say it, I've turned out to be a very poor blogger.  My wife and I took a vacation to Europe from mid-July into August, so of course there was a reasonable break in the postings here, but several more weeks have elapsed of complete silence for which there is little excuse.

From a hobby stand point I have been busy, but not with the ships. Completed a long term partially completed unit of 40mm Prince August cavalry: 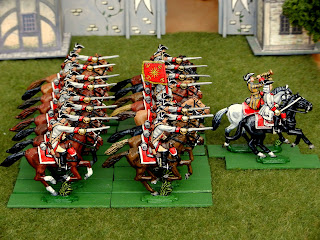 And most recently, I've been hard at work on a battalion of Wargames Factory 28mm plastic War of the Spanish Succession infantry.  Great figures for the price.  As they are somewhat generic troops, I have decided (after long resisting it), to climb aboard the Imagi-nations bandwagon.  Hence this unit will be the first for the "almost France" Kingdom of Burgundy. 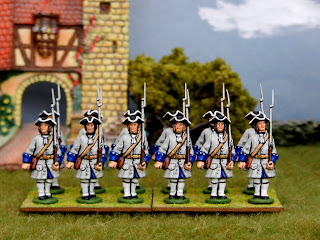 To explain, my wargaming enthusiasms run in cycles.  I have careened back and forth between many eras and conflicts (with the usual byproduct of accumulated lead). But there are some primary favorites that sooner or later I always return to: 1) Early 18th Century,  2) Ancients, 3) ca.1900-era Naval, 4) Post-WW2/Modern (this latter one fueled mainly by System Soft Alpha turn-based tactical warfare video games).

All of which leads me to believe that I may have painted myself into a corner by making this a dedicated naval blog as opposed to creating a more all-inclusive one.  There are those who can skillfully juggle multiple blogs and manage to keep them all active and engaging.  Pretty clearly, I am not blessed with the "multi-tasking" talent when it comes blogging.  So far as painting and modeling go, by nature I tend to concentrate on one thing at a time to the exclusion of the rest.

To sum up, I'm pondering which direction to take this blogging thing.  I'm leaning towards keeping this blog as is, but creating creating a companion "land" blog which will be left generic enough to encompass everything else not belonging in this one.  I welcome your thoughts.
Posted by Corporal_Trim at 4:22 PM 9 comments: