Back in the Saddle Redux 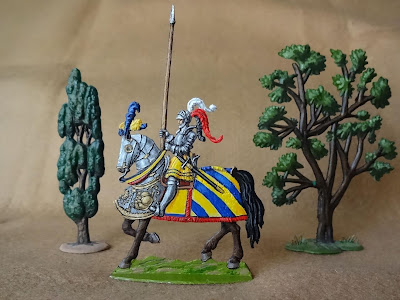 Wow, it's been nearly a year since the previous post.  A lot has happened. I retired at the end of July.  In August, we moved to a city out past Sacramento where the rent is cheaper and most of the kids & grandchildren live closer.  Nice town too, with enough hills to make the road cycling more interesting.  Haven't found much for the mountain bike yet, but sooner or later I hope to discover some good trails.

Work ?  Except for the people, don't miss it a bit !  Although I do have recurring and mildly disturbing dreams in which I'm still working the same type of job.  Hopefully, like dreaming of cigarettes after one has kicked the habit, they will eventually subside.

And after a long hiatus, I have resumed painting.  Finally all the paints and supplies are out of storage.  I've set up a nice workspace in the garage which fortunately has a window which lets in a good amount of natural light.  Getting somewhat cold out there now but still tolerable.


So what do we have here ?  This is a 40mm Renaissance knight ca. 1500 from Heinrichsen Zinnfiguren.  Nice old flat, the original set of landsknechts were issued in 1885.  He is casting # 46 in the series and about the only suitable mounted figure in the set. I bought the casting as a one off from Jim Horan a few years back and just got around to painting him.  I understand from Dr. Grobe of Heinrichsen that the mold is damaged, so for better or worse my paint job will have to suffice.  Here are a couple more close-ups. 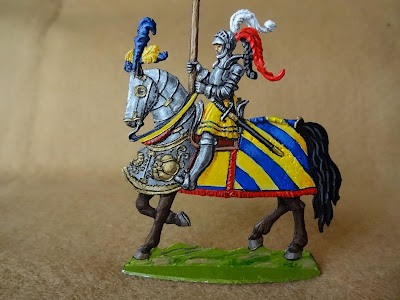 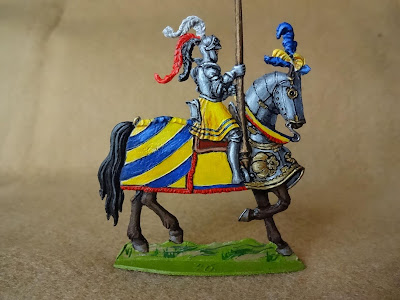 What next ?   I recently stumbled across some interesting 40-45mm semi-flats (with emphasis on the flat) made in Russia.  All told they are 32 different for the Italian Wars.  They're somewhat crude, but still appealing and match well for size with Meisterzinn.  I got 24 and will post in groups of 8.  But here's a taste. 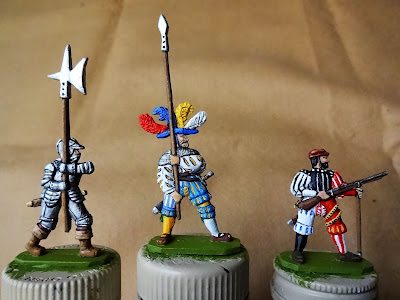