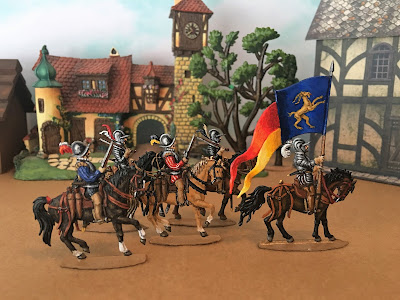 Let's take a look at two standard bearers which I have recently completed.  They're for my formations of mercenary reiters and later landsknechts.   I entered into this phase of the project with some trepidation as painting flags can be tricky.  My period for these is ca. 1550-1580, give or take a decade.  That aligns with the French Wars of Religion and first half of the Dutch Revolt.  And there's always the option of imagi-nations, but getting too fantastical will decrease the appeal of the figures should there be a reason to sell them later.

It seems that while the Imperialist, Spanish, Dutch, and for France the Royalist & Huguenot flags are at least somewhat known, for mercenary Germans of this period, I have found almost nothing.  Thus my avenue of approach.  One source could be the Triumph of Maximilian which illustrates a number of banners.  And while the old Dover edition of b&w woodcuts is a work of art in its own right, the colored version is absolutely glorious to behold. 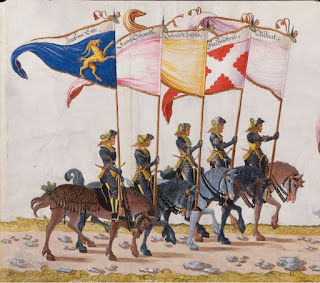 From this illustration I copied the goat rampant, hoping to at least avoid having him turn out like a crazed rabbit.  And the red banner was used previously for the 45mm landsknechts, I got good mileage out of this page. For the infantry, this German flag card from the 1930's served as the basis for my design. 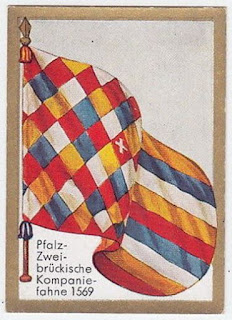 Taking on the diamonds would have been madness, but the stripes ?  Okay, let's do it !  On my figure, the flag is very close to 40mm in height where it attaches to the pole.  Thus eight stripes of 5mm each would work out. The thought of how to pull this off credibly with a flag that's tapered from the "front" side of the figure was intimidating. In the event, things went well enough but it was one of the harder things I've attempted.

So how did they turn out ? 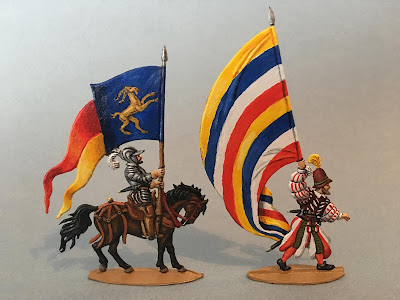 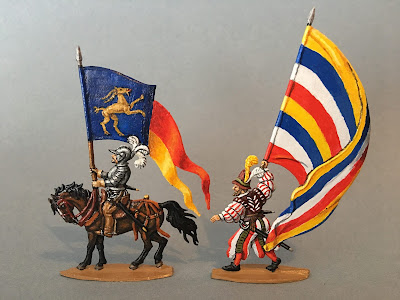 I'm happy with the result.  On the landsknecht flag, I didn't bother with attempting full-on connoisseur ripple effects as he's meant to serve as a fighting soldier with no aspirations of  being a modelling contest entry.  And one final "action" shot.  I didn't paint all these figures, bought some already painted on eBay.  I doubt I'll bother trying to rework them, whoever painted them did a nice job. 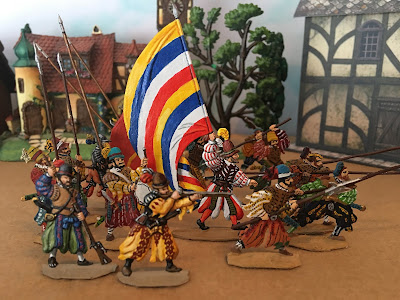 In parting, I wonder about these giant banners. Perhaps the size is exaggerated for effect, but from period illustrations they do appear to be quite large.  Even though probably made of light weight silk, the effort of holding all that mass aloft one-handed with a metal spike atop, it must have taken a strong man, particularly on a windy day.  And how did they keep it from getting tangled amidst the forest of pikes ?   Perhaps a Renaissance warfare expert can weigh in. 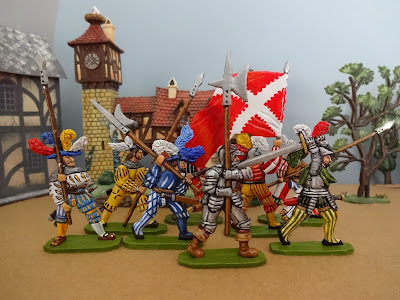 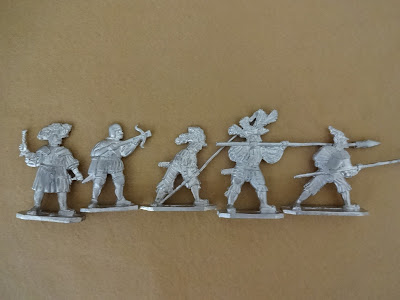 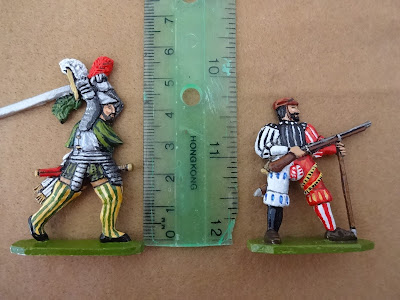 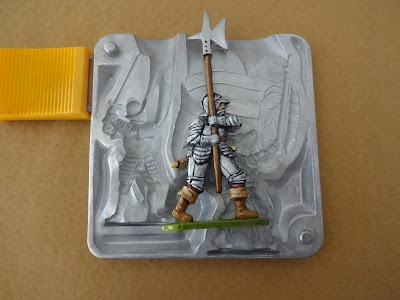 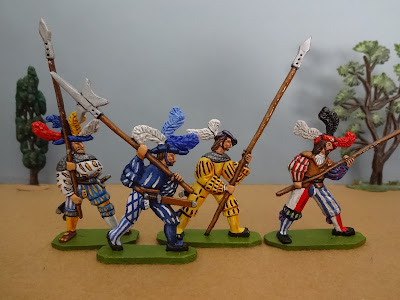 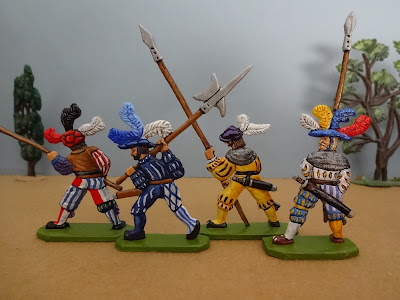 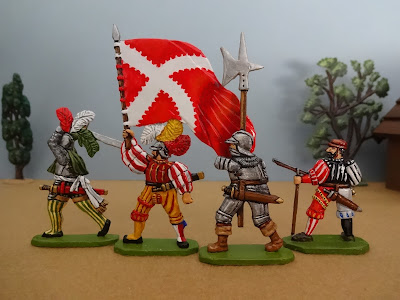 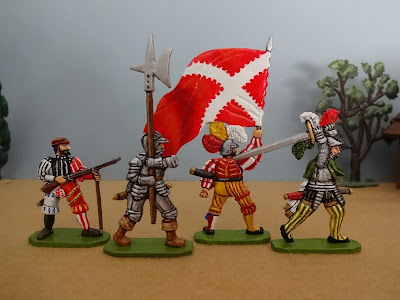 To sum up, I'm pretty pleased with them.  I think anyone wanting to game the early 1500's in 40mm who has been relying primarily on casting and modifying Meisterzinn figures would find these a useful option to pad the ranks of infantry with more variety.
Posted by Corporal_Trim at 9:36 AM 13 comments: