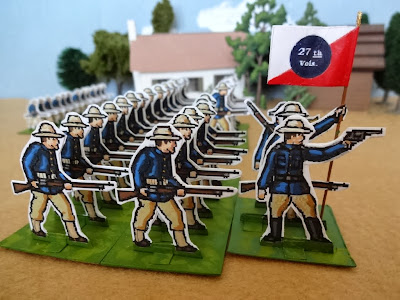 A month has flown by without a post. Can't use the excuse of being too busy, although of course going back to work has necessarily cut into the free time.  But if blogging were strictly the province of the retired and unemployed, the Reading List would be altogether skimpier. No, it's been more a question of getting stuck on the land aspect of the Weltkrieg project and making some false starts with it.  The process goes back further than a month, but to recap:

* Idea # 1.  Use 1/72 plastic WW1 figures. Painted some, they're good figures but didn't take more than a box or two to remind myself that painting 20-25mm rounds isn't so appealing anymore.
* Iteration # 2.  Use 30mm WW1 flats. Re-painted a few of these old Heinrichsens too. 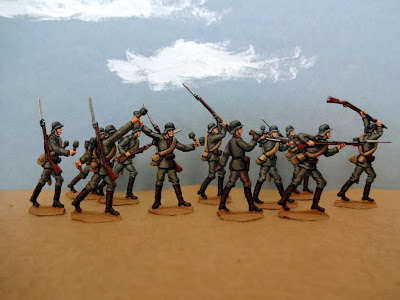 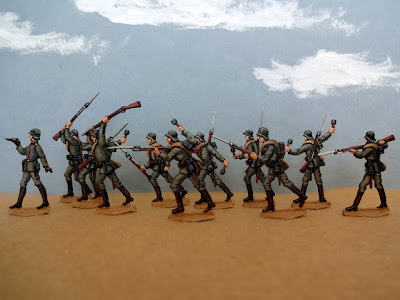 Not too bad, but once I decided to move things back a decade to make the naval aspect a pre-dreadnought affair, so too must the style of the land forces change. Bringing on:

* Iteration # 3.  30mm flats in the style of 1900-1905.  This also held the advantage of allowing for armies still in colored uniforms during this period of conversion to more practical, but drab, feldgrau and khaki. However, it became obvious that rolling the dice on eBay and augmenting with the odd Heinrichsen re-issue was a daunting proposition, both in finding suitable figures and much worse, paying for them all.  Bringing us to:
* Iteration # 4. 40mm flats and semi-rounds. I always had in mind more of a Funny Little Wars approach to the rules than anything too realistic.  For this, formations of men advancing in like poses held undeniable attraction to me (ignoring the realities of how deadly a place the battlefield had become with the advent of machine guns and rapid fire artillery), in favor of a toy soldier approach.

The 40mm scale has advantages too in allowing for economies by virtue of home casting some of the troops.  And the idea of augmenting the metal figures with paper soldiers from Junior General struck me as a cheap and easy way to add some forces otherwise unavailable.  To experiment with this, I selected some US Spanish-American war infantry to stand in for Federation armies.  I first tried enlarging them to 30mm ( #3 above) but there were a couple of issues.

First, my minimalist inkjet printer is incapable of smoothing out the heavy pixellation by converting to text files as advised in the Junior General tutorial. Nor was the color reproduction satisfactory. Secondly, they aren't easy to cut out precisely on the edge and the resulting border area of white paper was unattractive. I wasted a lot of time cut and pasting to MS Paint, experimenting with the right ratio of resizing and making 30mm figures before deciding to go the 40mm route.  Of course, that entailed yet more fiddling with resizing but held the advantage of proportionally reducing the border area and making the touch-up easier.

So here we have an example of the figures hot off the printer, and as I have made some improvement by means of smoothing out the borders and painting highlights. I use matte photo paper which takes the acrylic paint pretty well, although some care must be taken not to smear it while painting multiple figures per sheet. 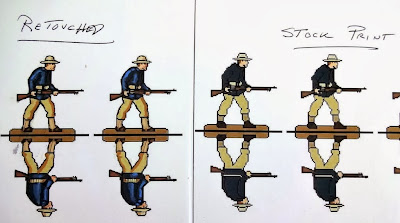 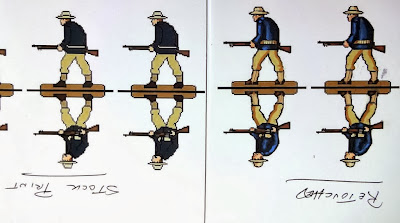 And a completed infantry battalion.  The bases are cereal box grade cardboard. 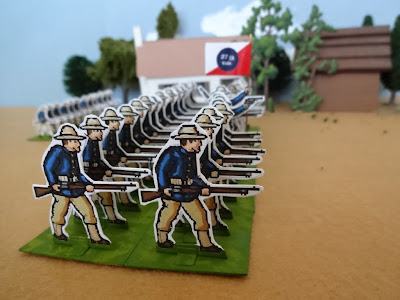 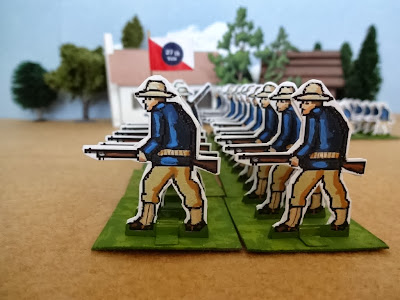 Honestly, it felt like way too much work for what I got out of it. But nice to know these paper guys can pinch hit when necessary, even if they lack the elegance of true flats. Upcoming posts will cover 40mm progress, as well as a Renaissance interlude with some Wohlmann flats which I am now painting. I needed a mental break after the tedious progress with the paper soldiers !

And lastly, here's wishing a happy and prosperous (or at least financially solvent) 2014 to all.
Posted by Corporal_Trim at 9:20 AM 15 comments: