Thanks to several good suggestions to the "Still Alive & Kicking" post, I've decided to expand the scope of the blog.  Now for some housekeeping.  I don't intend to dredge up every last thing I've ever painted, but did want to take advantage of the blog format to organize some older stuff here, probably with most of the emphasis on the flats, because first you don't see them every day, and second, I just like them.

First up, a few Austrians for the Siege of Vienna, 1683.  Two makers sets here, Schiller and Kieler/Ochel.  Which goes to show that the Germans, if not entirely consistent, usually hit very close to the mark when it comes to meeting a common 30mm standard.  Painted in acrylics. 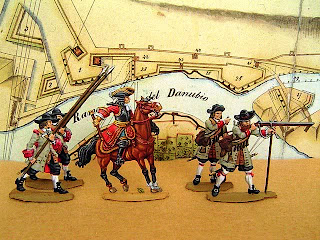 Posted by Corporal_Trim at 9:22 PM

Email ThisBlogThis!Share to TwitterShare to FacebookShare to Pinterest
Labels: 1680-1700, Flats