Finished the first battalion of the Wargames Factory multi-part plastic infantry.  As they're rather generic WSS troops, I thought they'd make a good foundation for an Imagi-nations project where you can build some nice troops to your liking and keep the button counters at bay.  Some have criticized the figures for the fiddly assembly.  Honestly, never found that to be much of a problem when for 2/3 of your soldiers: glue on the head, glue on the sword - all done.  Now as for building the cavalry, yes there will be solid grounds for complaint from those who detest putting small part together. But that's another topic.

Aesthetically, I'm pretty happy with the sculpting.  I did what I could to mitigate the "long neck" look which has been complained about.  I converted the legs and feet to gaiters, cut off the offending portion of the goofy upside down sword hilts.  The figures still look at tad bulky (although not consistently so), which I think can mostly be put down to the thick legs and the pose of the right arm. The latter could have easily been mitigated by moving the cartridge box back around towards the rear of the figure had the sculptor chosen to do so.

Anyway, without further preamble, here is the first completed unit of le royaume de Bourgogne (aka the kingdom of Burgundy), infantry regiment Chasselas. 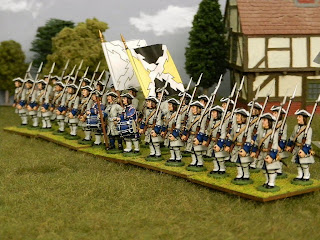 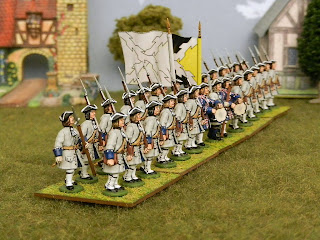 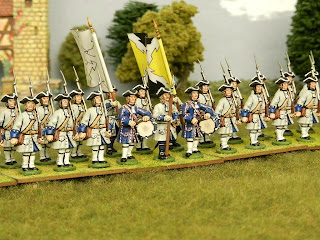 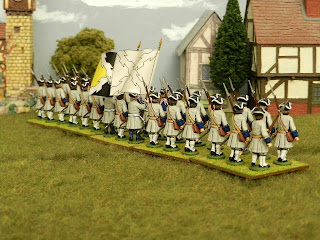 Posted by Corporal_Trim at 9:41 AM