Still catching up on some of the older figures. Here's the phalanx figures from an old Heinrichsen Macedonian infantry set..  I bought them on eBay in original factory paint, reworked in acrylics.  In keeping with the relatively simple style, I opted not to do anything elaborate with the shields. 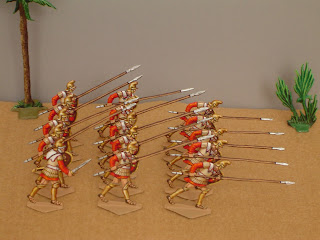 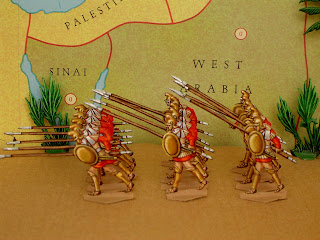 Coincidentally, Heinrichsen put this set back into production this year, 24 castings for 31 euros (or 189 euros painted as below). The figures were originally produced in 1921.  Heinrichsen still has the old molds and rotates various sets into limited production on a yearly basis.

I also have a few of the slingers and couple of the command figures, haven't gotten around to reworking them yet. The original factory paint is quite crude compared to what is currently sold, but had the advantage of being cheap back in the day relative to draining your Paypal account for a newly painted set.

Posted by Corporal_Trim at 4:05 PM