I've completed another batch of the BMC/Minifigs ships, will post shortly. Just a quick update here about plans to build German counterparts for the British ships.   I had some time over the long holiday weekend here (Memorial Day) to start construction.  The idea is to at least approximate the old-school style of the BMC ships.  Aside from over all simplification (the lack of boats and so on), to my eyes the two salient features of the old models are the high freeboard and exaggerated funnels.

Here's the Nassau, hull and superstructure completed.  The photos are rather poor, but they'll serve to give the general impression. 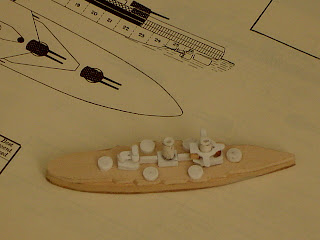 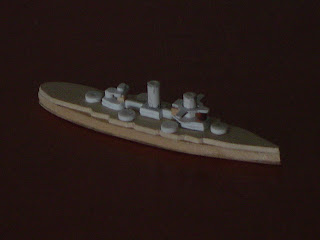 It's the usual composite technique, basswood hull and mostly styrene for the upper works.  Not so much left to do, but for me the turrets are always a tricky bit.  The ships of this class had large cranes on each side, not sure yet how I'll make these. And as the BMC capital ships feature torpedo net booms, those will be necessary as well although prior experience tells me they'll be a fiddly piece of work.  Haven't yet decided about adding casemate guns, but as all the cut outs for the firing arcs are in place, aside from the time to drill holes and insert the wire, there's really no point in not doing them. And the masts will be simple.

Time permitting, I should finish at least the construction later this week, if not the painting. 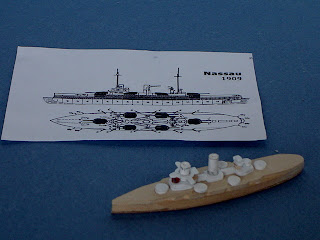 Added a better shot.  My basic technique is to shrink plans down to the desired scale and use them for templates. If you're aiming for accuracy, you've got to be careful about using Jane's for this purpose as the silhouette pages are for accurate ID and the plans themselves more intended to illustrate the various armor thicknesses and layout of the guns.  But so far as these more stylized models go, Jane's fits the bill providing the top down views have enough detail.
Posted by Corporal_Trim at 8:37 AM