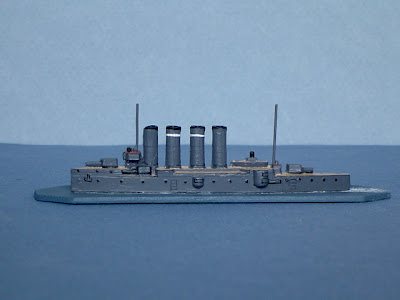 This ship has a distinctly less toylike profile than the Invincibles, wonder if more than one sculptor was employed.  Rebuilt the tripod masts and added the missing guns to X turret.

Very little needed to be done here aside from drilling and inserting a new mast.

Based as HMS Theseus. This closeup gives a good view of B.M.C.'s Roman numeral marking scheme at the stern.  This is one of the models that prompted me to dig deeper into their origins as there seemed to be little reason for inclusion of obsolete cruisers from the early 1890's in a set designed to wargame WW1.

A previous owner had chopped the aft funnels for some reason, making the boats hard to identify.  Restored with styrene tubing, didn't have exactly the right diameter but close enough.  And what navy ever had cooler names for their ships than the British ?

That's it for now. Plenty remain to be repainted but I'm going to work on scratch building Germans for a bit.
Posted by Corporal_Trim at 9:50 AM