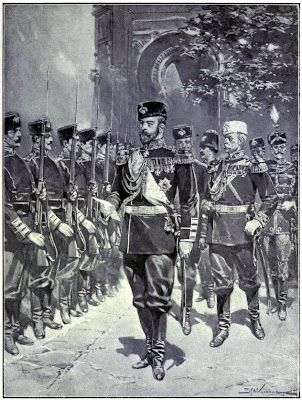 Time now to turn our attention towards the land forces. As indicated in the first post, I've decided upon using 30mm flats.  Fortunately, I didn't invest too much in acquiring or painting figures for the 1916-1918 era before making the final decision to turn back the clock a decade or so to the heyday of pre-dreadnoughts. All these are potential belligerents:

The idea is to use troops painted with historical accuracy (quite possibly with the exception of the flags) but now fighting for their respective imagi-nations.  So far as availability goes, French, German, Russian, Japanese armies are well represented with available castings or older factory painted sets on the auction sites. Some of the others are more of a hit or miss proposition, but as thousands of flats were cranked out depicting troops of the 1900 era, sooner or later other things will surface.  Just the other day, I saw a nice set of Serbs on German eBay. In any case, there's more than enough readily available to get started.

What comes first ?  I have on order and already en route from Germany this good old Russo-Japanese War grouping from Heinrichsen, Schlacht am Yalu.  One set of the castings was still in stock, and are supplemented by old (and probably rare) castings from sets depicting the battle of Liao-Yang and Siege of Port Arthur. A big tip of the hat to Dr. Grobe at Heinrichsen for her labors. Two countries, already sorted ! 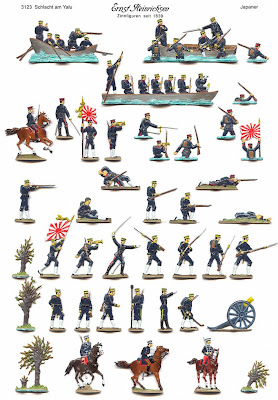 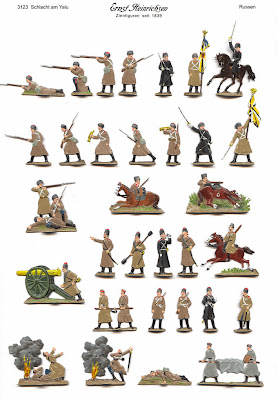 I'll be painting the castings myself, but Heinrichsen's modern mode of factory painting shown here is not bad at all.  Given the number of figures to be painted, I really must consider simplifying my own style in order to make sufficient headway with this project.  Speaking of the Yalu castings, I wonder if the designer drew some inspiration for the Cossacks firing over their mounts from this illustration ? 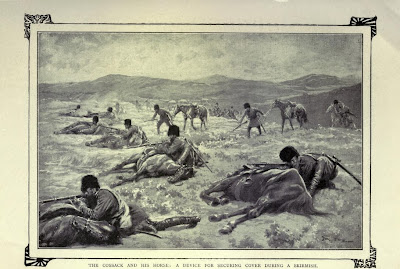 On other fronts, I located a strategy guide for Imperialism, and as you might expect, dirt cheap these days for such an "obsolete" game.  It's already proved of value for the map making.  Work is proceeding apace with the ships. I have some BMC reworks nearly completed and the samples from Shapeways scheduled to arrive today or tomorrow.
Posted by Corporal_Trim at 11:35 AM