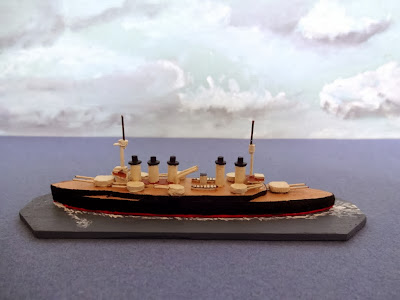 I'm going to put off for a bit the follow-up post about the Imperialism map-making experiment. Suffice it to say for now that it's going okay but not without some obstacles to overcome. But I'm still confident of making a go of it.

As indicated in the first post, this imagi-nations world war is inspired by the campaign guidelines laid out in Phil Dunn's Sea Battle Games book.  Hence the planned emphasis will be on naval activity, but you know me, can't resist painting some soldiers too.  The action on land will hopefully take on a more concrete form than abstract battles between 10,000 man blocks, but with smaller skirmishes representing much larger scale battles.

It was the introduction of the WTJ series of Rapid Prototyped Plastic models which inspired me to backdate the project to the pre-dreadnought era. And 1/1800 is the scale of choice, for several reasons.  First, it seems a reasonable compromise between the playability of 1/2400 and the appealing detail of 1/1200.  Secondly, available models: WTJ, some additional offerings on Shapeways, and the opportunity to use my antique lead BMC ships.  And 1/1800 is about as small as I can reasonably go with scratch-building.  Yes, I could probably build 1/2400, but wouldn't be able to improve much, if at all, on Panzerschiffe where the ease of buying inexpensive commercial models would render my own labor hours a waste of time.

My plan is to adapt the Dunn template of real ships renamed for ficticious navies.  But not to the extent of drawing playing cards to randomly assign them to the player's fleets regardless of national origin.  My intention is, for the most part, to group the ships in their historical fleets with accurate color schemes.  The models should retain some commercial value if I later divest myself of the collection or upon my demise.

Which navies are essential ?  I think the following:

That almost completely takes care of the 7 Great Powers in the Imerialism scheme, perhaps some combination of Italy/Spain or Austria-Hungary for the other.  And who is not to say that Minor powers won't have fleets as well ?  Of course they could.

With that lengthy preamble out of the way, let's take a look at a recent scratchbuilding effort, a French Danton class battleship.  I did this model at 1/1800 scale, the usual composite materials of wood, styrene and brass wire.  I also used balsa wood in places in lieu of basswood, not entirely happy with the appearance of the model on that score but it did save some time.  Having based the ship on the Jane's Fighting Ships plan, not surprisingly the freeboard is a bit accentuated relative to the prototype: 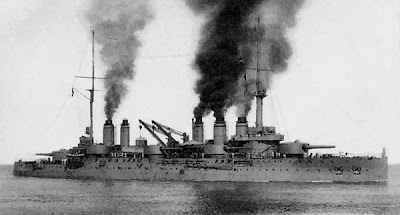 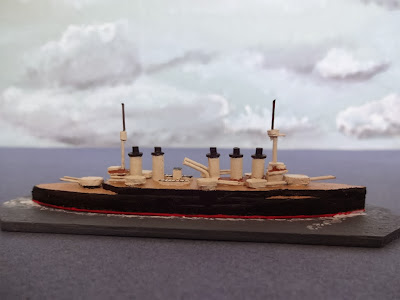 The peacetime livery ca. 1900 is how I want to paint the "French" ships but probably anachronistic. The slow pace in French shipyards meant that these "semi-dreadnoughts" weren't launched until ca. 1910 (already obsolete by the time they joined the fleet).  And speaking of semi-dreadnoughts, you have to think that the 9.4" secondary battery would have caused fire control problems when mixed with the 12".  The extra turrets sure increased my build headaches but once I started the ship, I wanted to finish it. 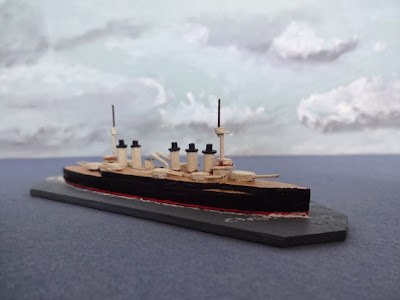 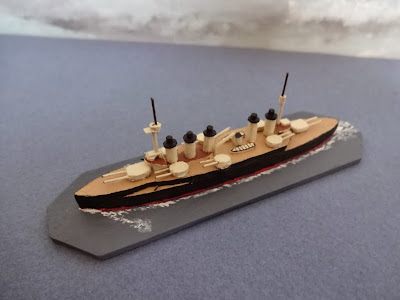 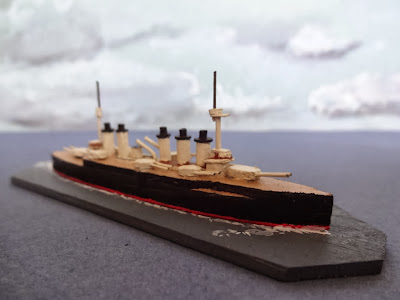 Not the greatest build as I was a bit rusty. Nevertheless, satisfactory.  I did choose to make it a bit simpler than what I did here with the Austro-Hungarian battleships: 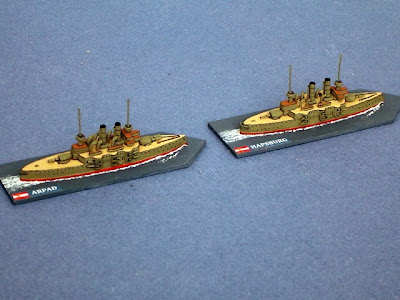 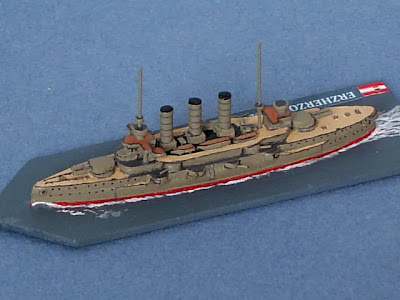 Upcoming posts: follow-up about the map, some words about the army figures and a few more BMC ships reworked.  I have on order some WTJ ships as well as a few from Shapeways but the lead time on scheduling the production runs of these models means it'll be another week or two before anything arrives.
Posted by Corporal_Trim at 3:06 PM