The Battle of Fort Panion - Part 3 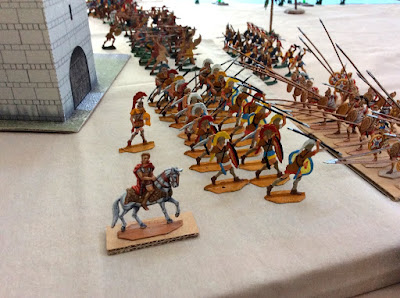 This post will encompass the final three battle turns with a final recap.With a lot to cover, let's get started.

Argos: The Fort Panion Slingers fire effectively against the Eruk infantry as they approach melee range, killing Prince Tiglath in the process. And the 1st Peltasts add to the mayhem striking down another 4, the Shemites ranks already shrinking before they can come to grips with the peltasts. The 3rd Peltasts somehow stand firm but miss Achilles.

Aquilonia:  The Tanasul Archers focus their fire on the 2nd Messentian, killing just one. The Elephant archers aboard Jumbo fire into the backs of the retreating Messentians killing another as do Achilles and Ajax against the Argive Guards.

On the Aquilonian right, it finally dawns on dim bulb Prince Alkestis that he's led the Young Companions on a death ride in rashly taking on the full power of the Turanian cavalry.  Reduced to a few bloody and exhausted troopers, they're wiped out by the Shahpur Light Horse. 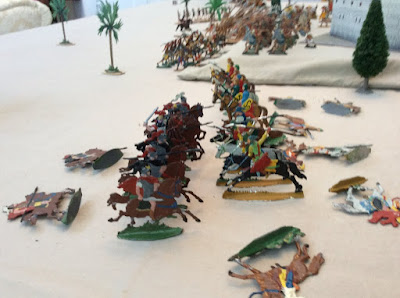 Meanwhile the 2nd Royal Guards close against the Samaran Horse, wasting the advantages of impetus and superior armor with a mere 2 Turanians killed vs.2 of their own. They've squandered their slim window of opportunity.

On the opposite flank, the Guards fight on, somehow keep beating the morale tests for overwhelming odds but like the Young Companions, seem unlikely to survive much more of it. 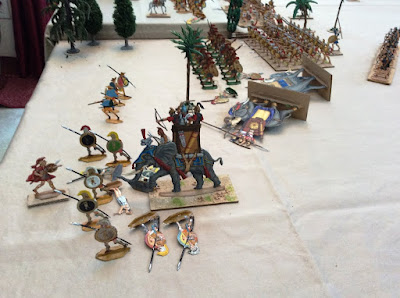 The elephants continue their rampage against the Argive foot.  Jumbo squashes another 5 of the routed 1st Messentian. Fighting stoutly, the Foot Guards lose 2 men but succeed in hamstringing Achilles and Ajax who collapse to the dusty earth trumpeting their agony.

And what of our commanders ?  Bardikkas, observing that things go badly for his cavalry on the right flank, rides to the Tanasul Archers: 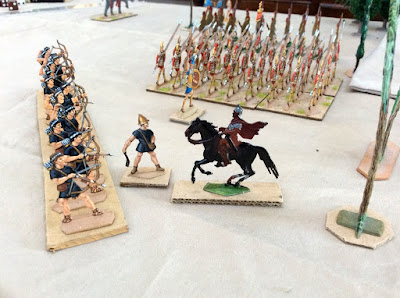 Bardikkas: Philocrates, it goes hard for us on the right. Hasten your archers there, at the double. Should the Turanians break out and attempt to flank our foot, shoot them down ! 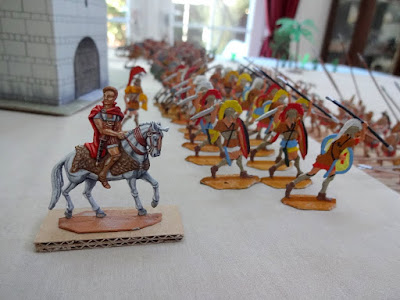 Memnon, his horse frantic from the alien smell and trumpeting of the elephants, barely controls his skittish mount with a firm hand and removes himself to Fort Panion Hill. 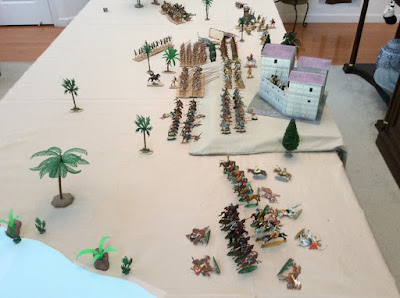 The situation at the end of Turn 4.

Aquilonia: Seeing the 1st Messentian are finished, Jumbo's mahout swings him right to attack the 3rd Peltasts. In the center, all heavy infantry moves into melee.  The Tanasul Archers forgo firing and as ordered, make their double move towards the right.

Argos: Throwing away their shields to make better speed, the survivors of the 1st Messentian flee the battlefield, carrying Iollas along with the tide.

Argos:  The 3rd Peltasts continue their record of futility against the elephants, Ajax making a saving throw on the hit.  But their counterparts on the hill fare much better, the 1st Peltasts killing another 5 Shemites just before they close to hand-to-hand combat. 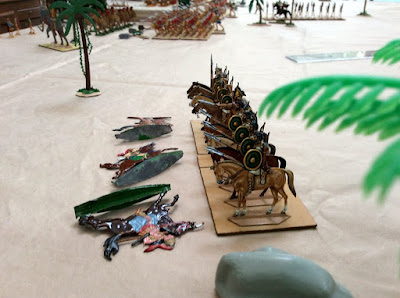 The Argive Guard cavalry go down fighting to the last man against the Daramish Light Horse. 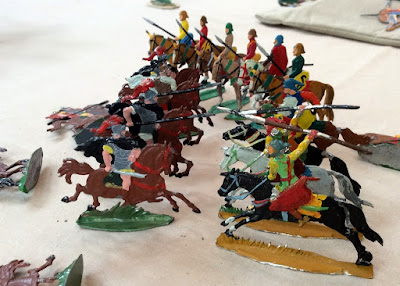 On the opposite flank, facing two units of Turanians, the Royal Guards suffer another 3 casualties against only one inflicted. 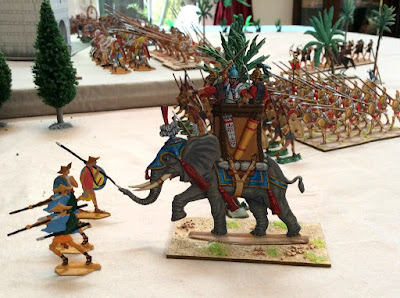 In the shadow of Jumbo's looming bulk, the 3rd Peltasts fail morale check and rout from the battlefield. 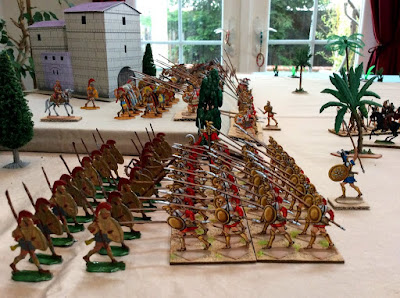 With a mighty clash of iron and bronze, the elite phalanxes collide.  As the rules are silent about how sarissa-armed phalangites might fare against troops armed with swords or spears, I make a house rule: first round of melee only, pike armed troops do not take damage.  Thus the Foot Companions inflict 5 total kills on the Guards who repay them in the 2nd melee round with 2 kills, one being the phalanx commander Phillip.  But deputy commander Pallantides stands ready to attach himself to the Foot Companions. 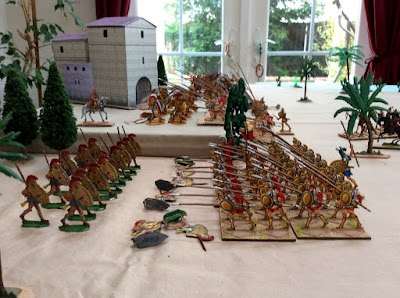 Already unnerved by their losses in repulsing of the elephants and with the Foot Companions pushing them hard, the Guards fail morale check and retreat one move in good order. 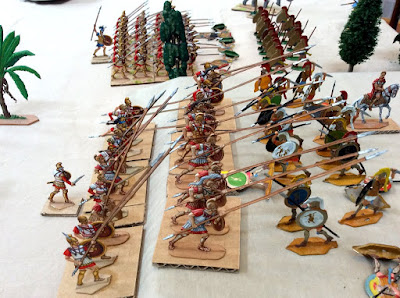 In the center, the Aquilonian Mercenary Phalanx assaults uphill against the hoplites of the 2nd Messentian. They inflict casualties 4:2. 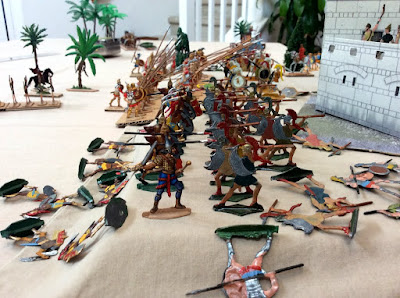 In front of the fort, the decimated Eruk Infantry attack with berserk fury, revenging themselves on the light-armed 1st Peltasts with 9 kills to 3 in return. Amazingly, the Shemites have nearly evened the odds,  But the peltasts pass morale test and gamely fight on, in the heat of battle forgetting the pre-battle orders to retire behind the Turanian cavalry and let the Shemites bite granite against the walls of the fort.

Argos: With the Foot Campanions relentlessly coming on and Jumbo looming up on their right flank, in order to preserver the core of Milo's army, the Argive Guards retreat from the battlefield in good order. 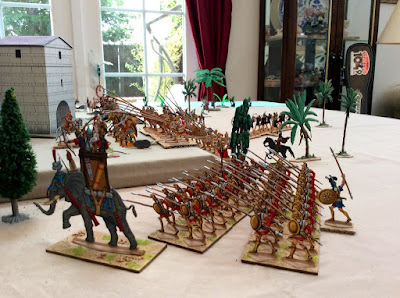 Aquilonia:  With no hesitation, Pallantides orders the Foot Companions to wheel right and prepare to ascend the hill, with the intention of rolling up the Argive line.  Jumbo secures their left in case of a change of heart by the Argive Guards.  Having finished the Horse Guards, the Daramish Light Horse gallop back towards the Aquilonian right with a double move.

In the center, the Mercenary Phalanx continues to press the 2nd Messentian hard, inflicting 6 casualties to 3. 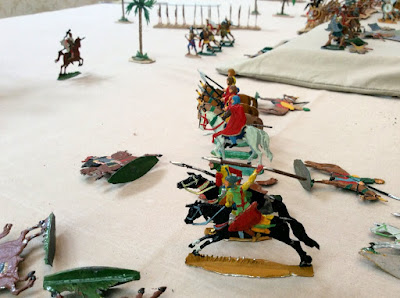 The yoeman performance of the mercenary Turanians being about the only bright spot for Argos this day, the 2nd Royal Guards are further whittled down to just Dion and a few troopers, who fly in the face of insurmountable odds. 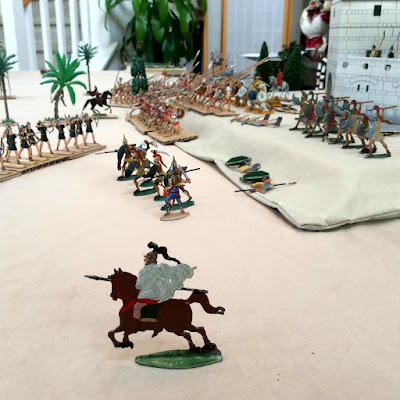 The heavier armed Eruk Infantry continue to heavily punish the 1st Peltasts with another 5 kills for just two of their own.  Yet with the odds finally evened and the prospect at hand of being able to slay their tormentors to a man, the Shemites fail morale check and inexplicably break with victory at hand. In the foreground, Dion lives to fight another day. 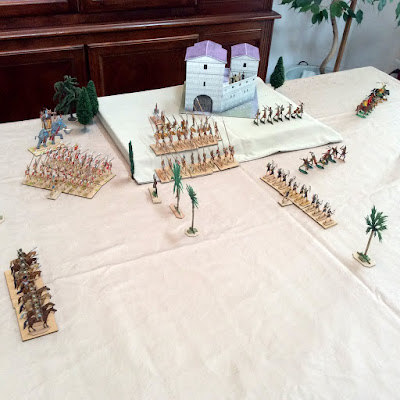 The situation at the end of Turn 6.  Although the Turanians and peltasts have seen off their enemies, the Argive right wing has been entirely routed or destroyed.  The Foot Companions threaten to flank the 2nd Messentian, and with the relatively fresh Tanasul Archers and Daramish Light Horse ready to reinforce, the day appears lost for Argos. Memnon decides to leave the miscreant garrison of Fort Panion to the tender mercies of Black Bardikkas and orders a retreat.

Thus a hard-fought victory for the forces of Aquilonia, King Epeus' punitive expedition has succeeded. Upon hearing from Pallantides that the garrison of Fort Panion has offered to surrender with the honors of war, Bardikkas snorts with derision: "Honors of war ? The knaves can die when I starve them of food or drink or they can die when our siege engines open a breach and we put them to the sword.  Tell them to surrender now unconditionally and I'll spare their lives".

Bardikkas remained true to his word.  The garrison was spared but stripped of everything and enslaved, brought back to Aquilonia in chains to serve out the rest of their shortened lives in misery working the silver mines at Pasentium.  Fort Panion itself is annexed by Aquilonia, the king opting to install a garrison of his own instead of pulling it down.

Although I found the melee conduct a bit fiddly, the rules in general seemed  straightforward and well suited to the action.  I did commit one blunder which had some impact on the battle.  For Turns 1-4, I somehow overlooked dicing for "contact morale" at the conclusion of each two melee rounds.  Awakening fresh for the second day's conclusion, I discovered my oversight before resuming with Turn 5. And although I diced for the rest of the contingencies such as overwhelming strength, it did play out in some heavily bloody cavalry fights with the right of the stronger prevailing without the wild card element of surprise, that is - the weaker side lifted up by an unlikely reversal of fortune.

I have to wonder, was the deck stacked against Argos ?  Perhaps I instinctively realized this in adding the mad charge of the Young Companions, but even so the power of the elephants in wrecking a large and small Argive unit as well as weakening another weighed heavily in the event.  Funny thing too, because I have several old painted Egyptian chariots, considered adding them to the army of Argos as a counterweight but did not.  I suppose I felt they were lacking that menacing Persian/Seleucid scythed chariot ambiance, but in a Hyborian battle, who cares really ?

To sum up, I enjoyed everything about this battle, organizing the armies, creating a back story, fighting it out, doing the photography.  What I liked most is that the thing kind of took on a life of its own once I started the troops in action.

Eventually I'll do this again and am looking forward to painting some new units to make the next battle a fresh spectacle for myself and blog readers.  I also have several terrific command figure castings in the Carl "Battle of Issos" set who will make suitably impressive generals. In any case, I hope you enjoyed this one.
Posted by Corporal_Trim at 3:05 PM