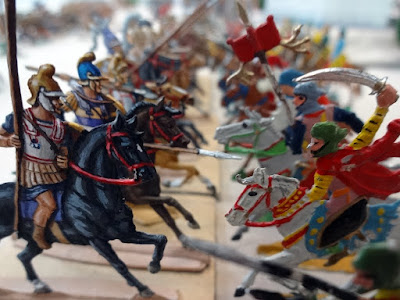 Now comes the fun part.  I'll break the fighting down into two posts, this one covering Turns 1-3 and in the next, Turns 4-6 and with a final recap and lessons learned.

With the engagement about to commence, let's look in on the leaders. 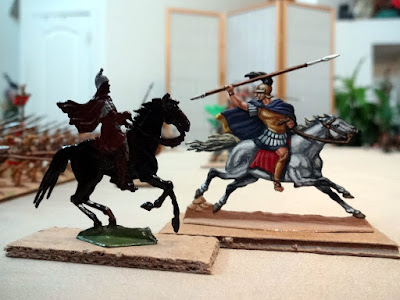 Alkestis:  Bardikkas !  Why do you dally, sir ?  There lies the enemy, the insolent despoilers of my father's kingdom !  Give me command of the right and I'll whip these dogs back down the road to Messantia by high noon !

Bardikkas:  Prince, need I remind you that the King hath given me command of this   army ?  I commend your zeal, but we'll attack when all is in readiness and not before. Now return to your unit, sir !  Await the signal to advance, and do not charge their horse until I order it. 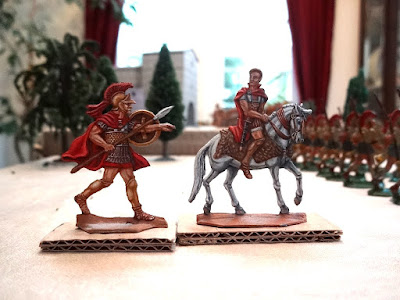 Iollas: Strategos, you know I'll do my duty but I must confess I like this not.  The phalanx threatens to overpower our center. The men are already shaken by the appearance of these elephants and our horse unused to them.

Memnon: Aye, but think on this. In the center we anchor our line on high ground, we can contain their horse on the left.  On the right, the Guards can be counted on to fight no matter what.  And mayhap the 3rd Peltasts can turn or even kill one or two of the beasts. 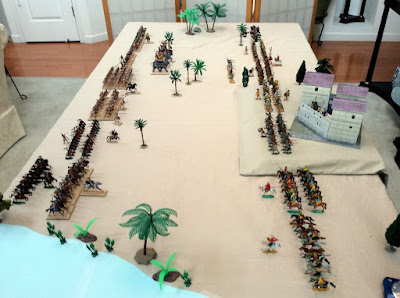 The plans are simple enough.  Aquilonian commander Black Bardikkas will steadily advance on both wings with the right anchored on the Trimsos River.  On the left, the missile troops should be able to shrink the Argive ranks on the way in.  Once the elephants charge home, the center phalanx units will overwhelm the hoplites.  The right wing cavalry will jointly attack and although somewhat outnumbered by the Turanians, they're better armored and should fare well when to comes down to the melee.

For Argos, without a ready reserve, strategos Memnon will stay on the defensive and await developments. The peltasts posted in front of the fort should be able to target the Aquilonian cavalry as they sweep by, augmented by the slingers in the fort.  The enemy Foot Companions and elephants create a gnawing sense of unease, but from what he knows they are by nature peaceable beasts and perhaps their imposing appearance is but a sham to overawe his troops.  And the Guards both horse and foot are redoubtable troops, the Messentian citizen hoplites more in question.

Due to the size of the table, I tore a page out of Featherstone's book and halved the movement allowances.

Bardikkas sounds the trumpets signalling the advance, standard move ordered for all units.

But the impetuous Prince has other ideas, initiating a double move: 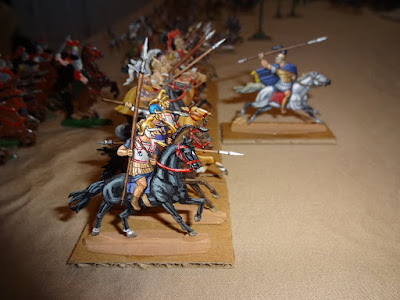 Alkestis: Companions, before us lies nothing but Turanian rabble !  Let us sweep them from the field.  Then we shall round the fort hill and fall upon the enemy's right flank from the rear. Undying glory shall be ours !  Charge !! 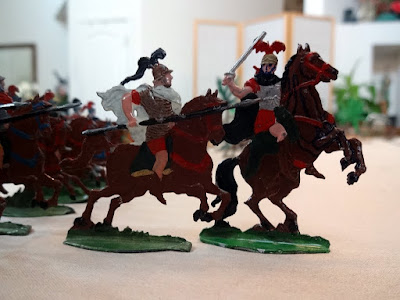 Dion: Sir, the Young Companions have begun the assault !  Shall we also charge ?

Galenos:  Nay, hold !  The young fool has more courage than brains.  Let us stand for the nonce.  If they look to be succeeding, we shall reinforce.  If they fail, we cannot be faulted for remaining obedient to orders.

The narrowness of the table means that most of the bow and sling armed troops can select targets within the 24" long range.

Argos: 3rd Peltasts hit an elephant with no damage. The Fort Panion Slingers score two hits and kill an Young Companion who fails his saving throw.

Aquilonia: Elephant mounted archers kill one 3rd Peltast.  The Tanasul Archers draw and loose against the 1st Messentian hoplites, visiting mayhem upon the close ordered Argives. Luck seems to be with Aquilonia this day, the archers getting uniformly high dice with no saving rolls for the hoplites.  The Daramish Light Horse achieve 3 hits on the Horse Guards who are all saved by their armor. 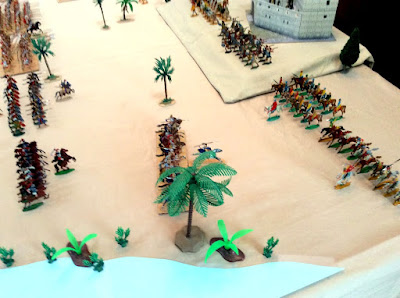 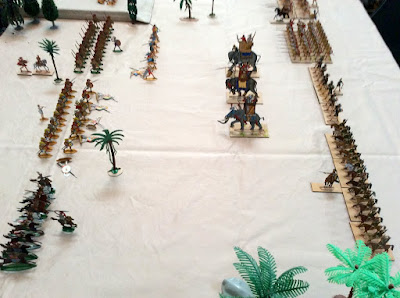 And on their left.  The 1st Messentian Infantry hoplites already in a spot of difficulty.

Argos:  The 3rd Peltasts move to their right, both to get a better shot at the elephants and in preparation to retreat through the gap between the Guards and 1st Messentian.

Aquilonia:  Double move, all heavy infantry.  Standard move for the rest of the line.

Aquilonia:  From the swaying backs of their mounts, the elephant crewmen all miss. The deadly Tanasul Archers do not, scoring heavily on the lightly equipped 3rd Peltasts.  The Daramish Light Horse score one kill against the Horse Guards who make most of their saving throws.

Argos: On their part, the 3rd Peltasts pass morale check for proximity to elephants.  But evidently shaken by the casualties inflicted by the archers, they get off only one hit against the Elephants with no damage.  Over on the left, the Fort Panion Slingers all miss the Young Companions.  Part of the 1st Peltasts are within range and also fire as the Companions surge past, 4 hits but all saved.  Will the Prince's luck hold ? 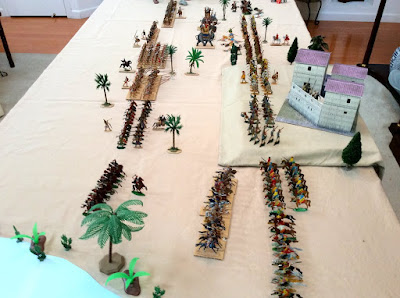 The overall situation at the end of Turn 2. 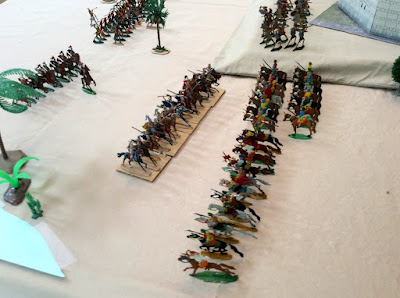 On the Aquilonian right, having burned a double move the previous turn, the Young Companions are unable to make contact. 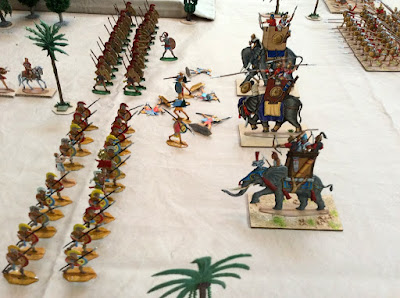 And on the left, the 3rd undermanned 3rd Peltasts have suffered heavily.

Aquilonia. Standard move all along the line.  The Elephants and Young Companions close to melee.

Argos:  The survivors of the 3rd Peltasts retreat behind the shelter of the heavy infantry.  Galled by the fire of the Duramesh Light Horse, the outnumbered Horse Guards gamely charge home against them.  Meanwhile, seeing the 1st Messentian under duress and their commander struck down with an arrow, deputy strategos Iolllas attaches himself to the unit to stiffen their morale.

Argos: The 1st Peltasts get off a deadly volley of javelins against the Young Companions as they charge to contact, 5 hits, 4 kills.   Meanwhile, the Fort Panion slingers turn their attention towards the 2nd Royal Horse Guards, 2 hits but both saved. 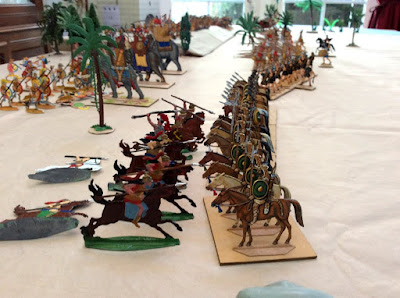 The Daramish Light Horse put away their bows and ready their spears for close combat. The vaunted Argive Horse Guards suffer a terribly disappointing result, actually losing 2 men to 1.  With the stand-mounted units, I recorded the casualties on paper, removing a stand when that number of troops were lost. From left to right, the elephants are Jumbo, Achilles and Ajax.  Jumbo and Achilles crash into the hapless 1st Messentian, who having suffered a disastrous day, lose their morale test and break. Rendered helpless by their panic, they're unable to fight back. Urged on by their mahouts, Jumbo and Achilles rampage through the hoplites, killing 9.  Ajax charges home against the Foot Guards. Made of sterner stuff they stand and fight, losing 3 men but unable to wound Ajax in return. 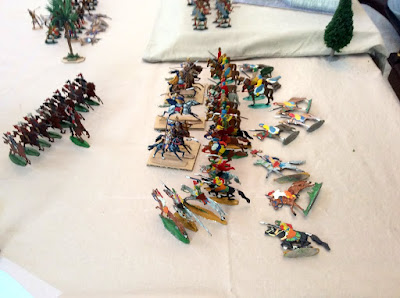 On the Aquilonian right, the Young Companions close with the Samaran Horse and Shahpur Light Horse.(also photo at the top of the pose).  Despite the odds, the 1st round impetus bonus combined with their better training and armor come into play, inflicting a 2:1 kill ratio on the Turanians. 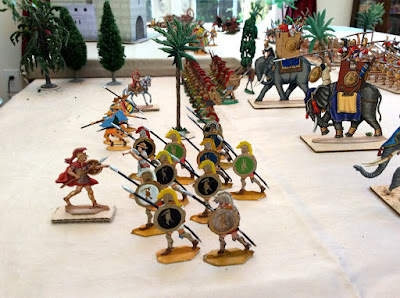 Iollas exhorts the fleeing 1st Messentian to stand and fight back.

Thus at the halfway point, the forces of Argos appear in difficulty.  But with his left holding and the center as yet untouched, strategos Memnon believes his army still has a fighting chance.

The conclusion will follow in a few days.  And a Merry Christmas to all !
Posted by Corporal_Trim at 10:20 AM