I've been a mere dabbler in this Imagi-nations thing for some time now.  I've been going about it somewhat backwards, painting figures with an unfocused intention to eventually develop their imagi-nations world to the point of having plausible nations with a history, identity and suitable motivation for war.  But always putting off the work of doing the "imagi-nations" part of it right, probably because it's seemed like, well....too much like work.

The funny thing is that when growing up, my brother and I created a richly imagined continent whose countries were ruled by characters from fiction or more often, people we knew in real life.  We did role playing, made illustrations, created football leagues (the American game) and often these countries fought wars. We didn't play in any style that could be dignified with the title of "wargaming", at least not in the adult sense.

Wargamers, kindly indulge me for a moment. Truly the most memorable thing that developed wasn't wargames, but the sports car racing.  We dice-raced multiple seasons with 1/32 toy and model cars on racing circuits drawn in chalk on the cement floor of the basement, each of the countries holding a Grand Prix or two.  We published the race accounts and results in a hand-lettered Motor Journal, with driver and manufacturers championships awarded at the end of the season. Magical things happened: hard luck drivers uncannily broke down at the worst moments, devil-may-care drivers in the mold of de Portago sometimes didn't live long, team and driver rivalries were rife.  One year, a new two-car team of Aston Martin DB4 GT Zagatos improbably swept all before them, leaving the hordes of Ford, Ferrari and Porsche drivers to fight over the scraps of the remaining podium spots.

Anyway, I'm not up to the effort of creating a massive new world, or even a couple countries worth of it.  I have the early 19th Century map done in Hexographer, but it doesn't have nearly enough sea hexes for a global naval conflict.  What to do ?  Casting about for some computer-aided help, I remembered the late 90's PC game, Imperialism.  Some of you may recall it. 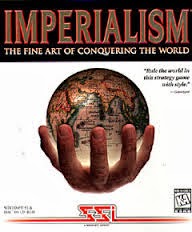 I thought it might be usable but was doubtful of finding the game and even more doubtful of getting it to run on my Vista 64 operating system. But it was worth a shot, a quick Google search and http://www.gog.com/ popped up on the first page. Bingo, Imperialism I @ $5.99, not a huge risk.  And not a bad deal at call considering I got "The Witcher: Enhanced Edition" thrown in for nothing.  Great action RPG by the way, if you like that sort of thing.

In a nut shell, Imperialism is a game of world conquest spanning a century (1816-1916), tightly focused on economic development, trade, diplomacy and war.  There are two ways to play: Historical Scenarios or Random Worlds.  It's funny, I played a bit of Imperialism when the game first came out, but didn't persist with it. I recall finding it a bit complex, which it certainly isn't when compared to games like Victoria and Hearts of Iron.  The basic gameplay elements are relatively simple: it's how you collectively manage them against a cunning AI, therein lies the challenge.

My idea was this: play in a random world as one of the Great Powers to develop the world's infastructure, and letting the course of the gameplay create it's own backstory suitable as a jumping off point for my campaign.  Random maps can be generated at will, just continue clicking on the globe icon until arriving at a satisfactory configuration of continents.  In the Random Worlds mode, there are 7 Great Powers and 16 Minor Countries.  The basic map unit is the Province (120 in all), of which the Powers start with 8, Minors owning 4 each.

That's rather too regular for my needs, but it seems simple enough to continue playing until some of the Minors are absorbed through colonization or conquest, and the Powers have fought enough to grow or shrink according to the fortunes of war.  Hence the size of the countries will begin to take on an irregular nature, with enough squabbling over colonies, land grabs against the Minors and grudges between the Powers over territorial gains or losses to provide suitable casus belli.

How is this plan working out so far ?  With some reservations, not too badly.  Observations and some trial AAR screenshots will follow shortly.
Posted by Corporal_Trim at 9:37 AM