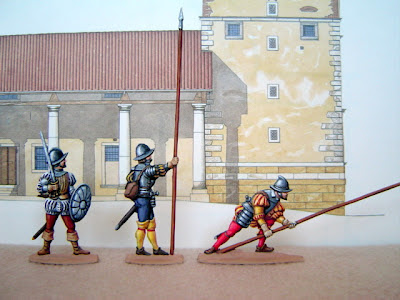 Still no camera yet.  Here's a small mixed bag of Renaissance flats: the landsknechts in pluderhosen are Kieler, a couple of Fechner riders and the Spaniards are from Alexander Wilken.  For me, obtaining Kieler zinnfiguren has been a matter of pot luck, getting some figures on eBay, others by trade and private sale.  Fechner and Wilken are both easy to deal with in English and use shopping cart systems with Paypal.  Wilken's Renaissance series figures are very nice designs, kind of a mixture of styles ca. 1500 - 1540.

I do dabble in the Renaissance era, like the period very much but I haven't quite settled on the approach yet.  Do I go with 30mm flats, or try to make use of my Meisterzinn molds for a 40mm project ? And which Renaissance, the early Italian Wars, or something mid-century or later ?   With the flats there's ample choice, 40mm probably has to be the Italian Wars era although playing a little fast and loose with historical accuracy and stylistic integrity seems like the path of least frustration.

At this point, I'm leaning towards the 40mm but I need to try out a few conversions first with the Meisterzinns.  I think the halbardier could convert simply enough to a pikeman, perhaps the landsknecht walking swordsman can be converted to a rear rank pikeman as well.  The tournament knight can pass for a French gendarme ca. 1500 if I file off the shield.  We'll see how it goes.  Seems kind of nutty to cobble something together in 40mm when there's such a rich variety of 30mm flats but I am tempted to try to finally make something of the very under-utilized Meisterzinns. 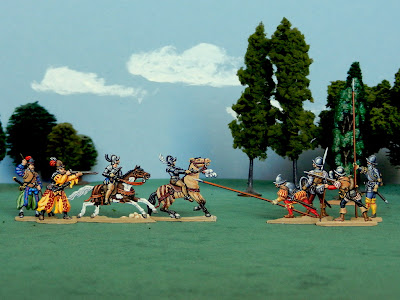 Posted by Corporal_Trim at 7:06 AM