War of the Polish Succession - Part 2 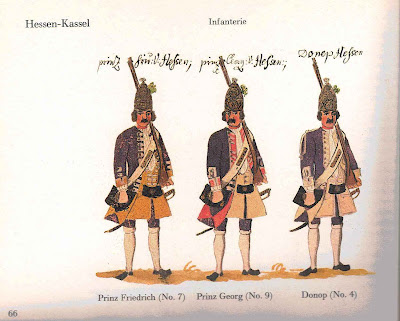 On to the uniforms. For the French, things are relatively well documented.  Between a wealth of information about the WSS and the WAS/7YW, we can reasonably extrapolate details about the flags, musicians, pocket designs and so on.  Then there is Rousselot's splendid series of plates, L'Armee Royale a l'Epoque de la Regence, if you're fortunate enough to have acquired it.  If not, no worries as it predates the 1730's by a decade or so, but still useful and inspirational.

Within more realistic reach of everyone are the Osprey Louis XV's Army books by Chartrand, skillfully illustrated by Leliepvre.  Here we have plates specifically labeled "Polish Succession War".  In addition to the color plates, the first three volumes at least (don't own the others), have black and white illustrations executed in a rather naive and appealing style by "Gudenus" depicting individual soldiers from different regiments ca.1735.  Unfortunately they're are attributed to a private collection, so while it may be tantalizing to speculate as to the exact contents of this collection, it remains mostly a mystery.

However, we have an artist's name, and in this fortunate era (so far as the ease of internet research goes), a search reveals more period plates in this style from German Wikipedia, and in color.  Thanks to Ralphus of the Wars of the Louis Quatorze blog for sharing these with us: 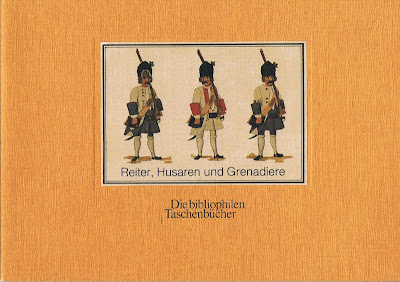 So what we have here is a high quality paperback, printed in a small format, 93 pages pages in German.  There is more text than plates, but the images are most appealing and very useful in illustrating samples of the various contingents of Prinz Eugen's Imperial army of the Rhine in 1734.   What has to be kept in mind is the title "Reiter, Husaren und Grenadiere" means exactly that. (and only one plate of the hussars). No flags, no musicians, no officers/NCO's, very few infantry in tricornes. However, the basic uniform details are here and flag information can be found from other sources.  It won't require a big stretch of the imagination to make some plausible guesses about how to paint the musicians/command figures, what button-counting pedant is going to prove you wrong ? 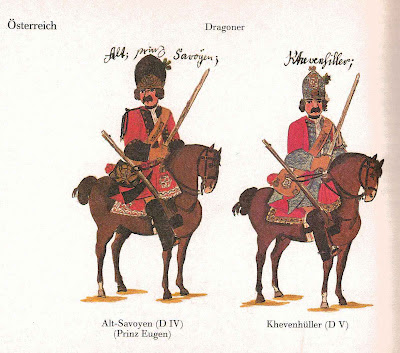 Posted by Corporal_Trim at 9:15 AM

Email ThisBlogThis!Share to TwitterShare to FacebookShare to Pinterest
Labels: 18th Century, War of the Polish Succession.