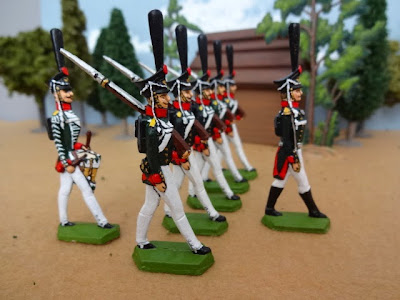 Here we have some examples of the Nowikoff home casting figures. Similar to the Createc Napoleonics ?  Yes, identical in scale and style.  I can find almost nothing about these on the internet although likely there's a connection to sculptor Anatoli Nowikoff.  I welcome comments from any collector who knows more about the rather mysterious Nowikoff line of molds.

So far the only dealer I've been able to find is Berliner Zinnfiguren and although they've discounted the molds somewhat less than the list price for me, no question that at their prices these molds are expensive.  Of course I can always rationalize, there's some economy of scale as - the more you cast the cheaper they get, at least relatively speaking.

No matter, let's take a look.  This blurry photo gives the general idea. The material is somewhat harder than the soft rubbery Createc molds but the casting design is the same, with a simple straight pour into the shako plume and bayonet.  For some reason I haven't been able to get many full casts before the results tail off.  The weakness is incomplete casting to the middle of the musket, as you can see I've cut another channel there and perhaps I'll widen it.  Some experimentation with metal temperature may also yield improved results. 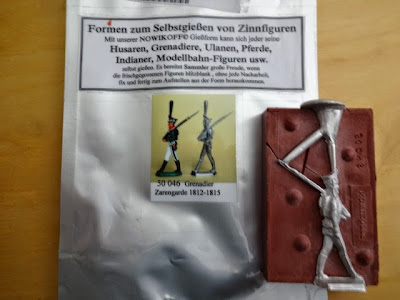 As you might expect, they're thin. Fine by me as it saves lead.  I think at this point it's pretty clear that for better or worse, I'm wed to the flat and semi-flat figure styles. 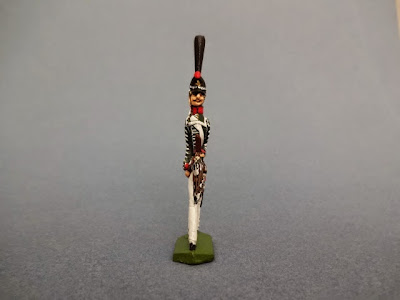 And as painted.  I do like the Russian uniforms ca. 1812, quite appealing. 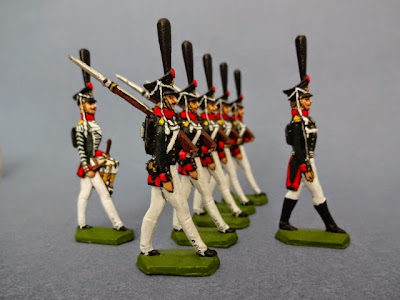 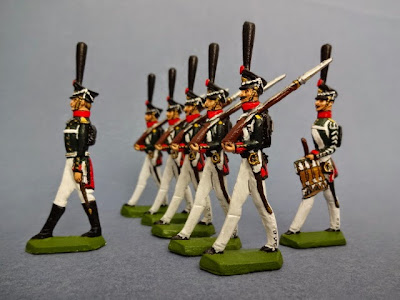 I've ordered one more of the marching infantryman pose to speed up the casting process.  I plan to use these for the early 1800's imagi-nations project.  I'm going with historical Napoleonic uniforms to add resale value (when the day comes) but the flags will be imaginary. Next up, the results of my best deal ever on eBay.
Posted by Corporal_Trim at 9:05 AM