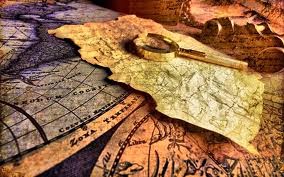 You may recall my post mentioning the plan to use the old PC game Imperialism to create The Lazy Man's Instant Imagi-nations World.  What seemed like a pretty simple idea ultimately involved sinking a lot more time into this than I had anticipated.

On the plus side, Imperialism creates a reasonably convincing 19th / early 20th Century alternative world, populated by challenging AI Great Powers competing with your own in the quest to become the greatest nation through a combination of economic strength, trade, diplomacy and war. The maps as zoomed in still hold up graphically, and are populated by provinces, natural resources and infrastructure built by the Powers such as railroads, mines, agriculture and so on.  And there is no fog of war blanketing these map features, although details of the other Powers' exact military strength, industries and inventory remain hidden, with the human player depending upon bar graphs rating the relative strength of the active Powers in industrial capacity, armed forces, size of merchant marine, and so on.

Further, while the Random country and province/city names can tend towards the odd, sometimes decidedly so, most of the game's seven Great Powers are given recognizable linguistic identities. Despite the strictly random arrangement of map generation, these cultures are linguistically identifiable and consistently appear in whatever geographic world the player chooses to select:

The remaining two are more of a mixed bag, sometimes Turkish, Scandanavian, Middle European in flavor or just a polyglot mixture. Nothing decidedly English, unfortunately.  Things get odder still using Fixed names (where the same 7 countries always appear), including two Powers Zimm and Haxaco with provinces bearing place names from New Jersey.  Unless you're Chris Christie, not so good. It seemed the way to go was letting the program create random Great Power names.

1) Alliance system in the Random game play causes some strange turns of events.
2) Aside from your starting Power, can't rename anything besides your army units and ships.

In the interest of brevity, more about the alliance system later.  Suffice it to say now that the well-worn "herding cats" phrase applies to the wacky doings of my AI rivals but I think I've learned enough through trial and error to avoid the most egregious, game-breaking outcomes.

On the second issue, it took me way longer than it should have to figure out that while the names of the Powers are not visible in the map creation mode, they are color coded. For example, the light blue country is Russian, orange seem to be Germans, and so on.  Before that belated epiphany, I was blundering around taking pot luck with whatever the program came up with, only to find out about 10 mouseclicks later that it just wouldn't do.  The other breakthrough was learning that a hidden map key system allows the player to save a good map format which can continually be restarted to generate new country names.

Even so, with the Saxonia (Yellow) under my personal control, it turned out that getting 6 other random names for the Powers where at least one or two weren't downright goofy was something akin to hoping for the right combination of winning lottery numbers.  It took me literally hundreds of new game restarts to arrive at the following, but at long last here we have it: the final cut !  (The simple flags designed with this handy tool - http://flag-designer.appspot.com). In no particular order, these are the international players:

SAXONIA (Yellow).  Odd province names, but they're going to be British and like it.

Another thing that turned out to be time-consuming was finding a map with a Minor country which could conceivably be representative for a US styled army and navy.  Rather a challenge as the Minor country names are often Asian in linguistic flavor, or just exceedingly strange.  The map I decided upon happens to have a suitable minor:

Yes, not a playable power in Imperialism but it can be once I kick things off. The backstory is that they gained independance from Vavarde ca.1800.
Showing the game's diplomacy menu, here is the map: 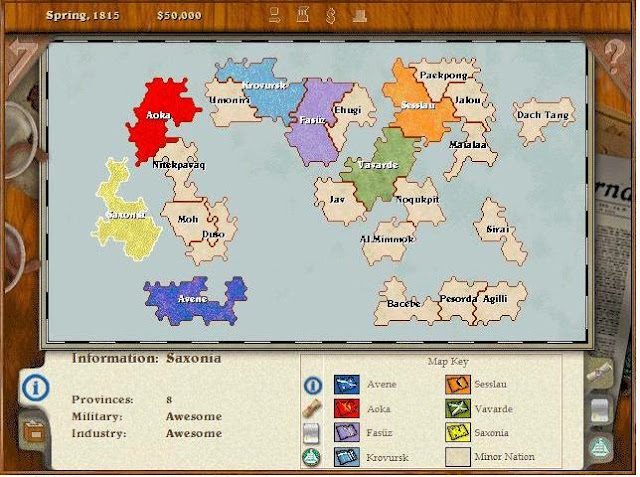 Coming up, more WTJ ships and having a re-think about the armies.  The appeal of using a Funny Little Wars approach for the army organization is growing on me, and using an economical alternative to amassing sets of zinnfiguren for the 1900 era.  I'm starting a new job tomorrow but one not nearly so lucrative as to contemplate buying up figures like Malcom Forbes, even if I had the time to paint them all.
Posted by Corporal_Trim at 11:06 AM