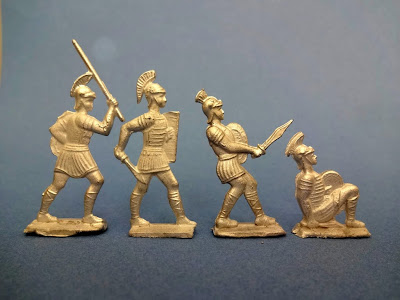 I was intrigued when I saw this mold pop up on the Berliner Zinnfiguren Flea Market. Ancient Romans in the 1900 era romantic style, could not resist the temptation. Actually there were two molds up at the same time, this resin copy and the other of metal. I opted for resin at half the price. 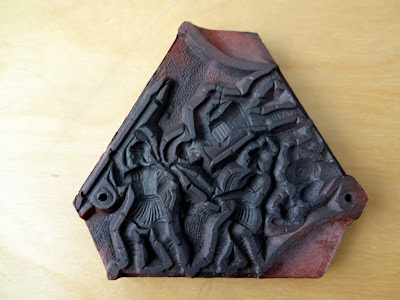 I don't know much about Ideal except that it was one of a number of German companies selling casting molds to hobbyists ca.1900. As you can see, the design is rather a novel one with four figures crammed into one compact triangular mold. Looks like the idea was to pour the lead into the semi-circular pockets at the two angles and let it run down into the figure cavities. I tried this at first but found it easier to drop directly into the figure cavities, scraping the excess metal from the bases with a chisel before it cooled, thus saving myself a lot of tedious filing later on.

How do they look painted ?  Let's take a look at the first two figures. 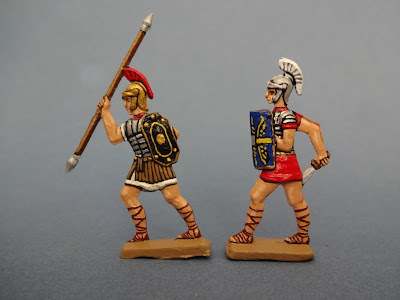 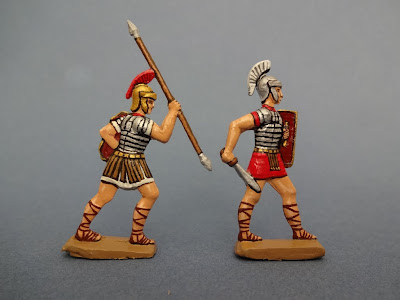 Old-fashioned, of course. The guy on the left is problematic on account of his spear seldom casting fully. I also think he'll look better fully armored in old-school leather instead of painting on the lorica segmentata.  The soldier on the right also casts with the leather pteruges hanging from the waist, but rather lightly engraved so I tried filing them off and just painting the tunic in full. Strange that they have no scabbards for the gladius.  These two figures are somewhat the largest, measuring ~ 40mm from the bottom of the feet to the eyes.

And the other two legionaries. 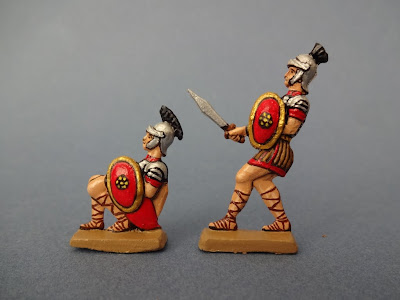 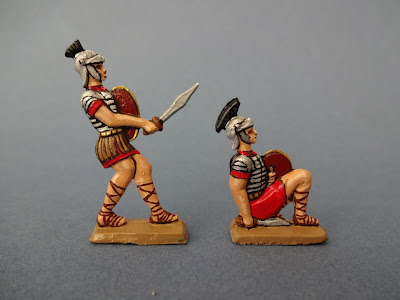 Oddly posed, no doubt a function of making all the soldiers fit into one mold.  You'd think that the standing figure could as well have been sculpted leaning forward in a more aggressive posture, but such was the decision of the designer.  Despite the quirkiness, I like him the best of the four figures. The squatting guy is less useful, but I think he'll do okay in the first rank, filling in the ranks to the rear with the standing figure (which measures ~ 36mm from feet to eyes).

I'm pleased with this mold.  Except for the spear problems the rest cast reliably.   The figures may not impress when viewed singly, but I think that ranged in their cohorts, they'll look good.  And, they're easy to paint.  I wonder if Ideal ever produced any other complimentary Ancients and if so, do these other molds ever come to light ?   One of those tantalizing facets of collecting I suppose, something else could turn up next week, then again maybe never.

In a subsequent post, I will photograph some of these various 35-45mm Romans posed together for scale comparison purposes.  In this same shipment I got a set each of Spenkuch flat Roman infantry and cavalry, very appealing figures and they match up quite well with the Heinrichsens.
Posted by Corporal_Trim at 3:10 PM