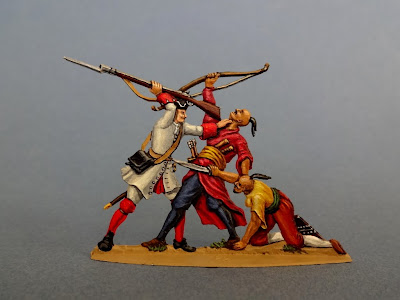 Here's another interesting set of antique designs from Heinrichsen, Prinz Eugen. 40mm in scale and first issued in 1887.  It features Prince Eugene of Savoy's campaign agains the Turks 1716-1717, culminating in the Siege of Belgrade in 1717.  This is right in the sweet sport for me so far as the historical period goes and the Ottomans add an exotic touch.

I scanned the following image from my copy of Ortmann's The Collector's Guide to Model Tin Figures (good book if you can find it).  The diorama consists of a few thousand 30mm flats and depicts Prince Eugene crossing the Danube in 1717.  It's one of the things that inspired my interest in the Ottoman-Hapsburg wars. 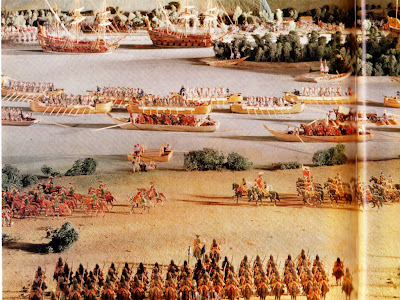 The Prinz Eugen set contains 45 figures, about evenly divided between Ottomans and Imperialists.
There are several well-animated figure groups like the one I've painted here.  In this set, the Austrian army has no cavalry figures for some reason, aside from two mounted officers. The Imperialist infantry are evenly divided between Austrians and Bavarians. As the Bavarian contingent was 6,000 strong out an army of 100,000, I'd have preferred grenadiers or Austrian cavalry but Bavarians it is then.

I hesitated to get this set because the Austrians didn't look quite satisfactory to me, with smallish hats and the coats too short. But they're really not so bad once the paint goes on.  And some of the Bavarian infantry are equipped with billhooks for unhorsing Turkish cavalry, there may be some historical precedent for that but I'm more inclined to believe it's an anachronism.  Considering the designs date to the 19th Century, I can't nitpick these figures too much on the grounds of historical accuracy.  I'll enjoy them for what they are and they should keep me busy for a while.  Painted in acrylics, as usual. 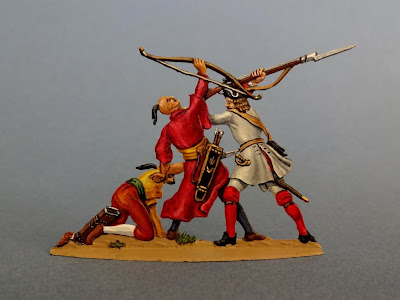 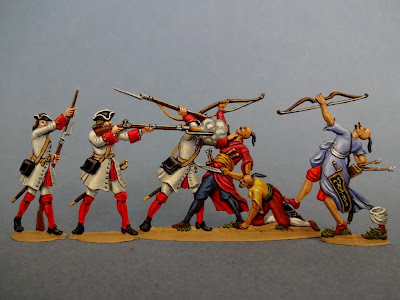 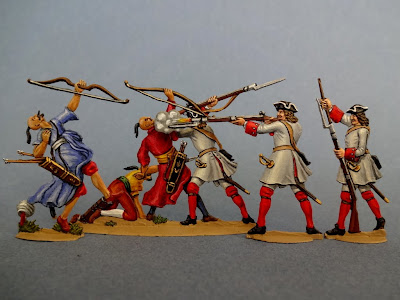 Posted by Corporal_Trim at 4:56 PM