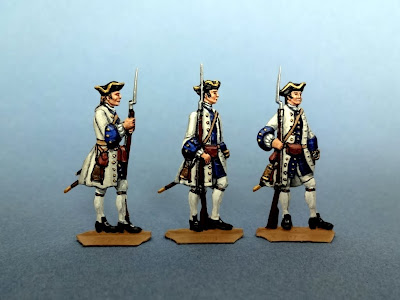 Here's a set I've had for a while. Pulled them out when I inventoried my WSS flats suitable for gaming purposes a few weeks ago.  They're sold by Berliner Zinnfiguren as # 229/24, Frankreich 1756-63, Linieninfanterie im Halt. It comes with 25 castings, primarily the three figures which I have test painted here, but also command. The bases are engraved "NS" and also attributed to Neckel by Berliner Zinnfiguren, not their own Scholtz figures which concentrate heavily on the Prussians and to a somewhat lesser extent their Austrian enemies.  Outside of Germany, Neckel is not an easy editor to order from as they have no real internet presence, so dealing with Berliner Zinnfiguren's markup could be the lesser of two evils compared with hassles of trying to order the old-fashioned way.

These aren't bad, but not exceptional either. Certainly not up to the gold standard of the classic Bavarians, Blue King's Army series.  A couple things I don't like about them, the powder flasks look oversized and the hats aren't so good. The static pose is another thing, I've really come around to the viewpoint that for wargaming purposes you just can't beat the utility of marching/advancing figures. But I have these and they're paid for, so sooner or latter I'll get around to painting the rest of the battalion.

BZ stretches a point by selling these as Seven Years War figures. To my eyes, the stockings and belly mounted cartridge boxes place make them better for the WSS - War of the Polish Succession.  They'd be easy enough to convert to gaiters but I chose the lazy route of just painting the stockings white. Painted in acrylics. 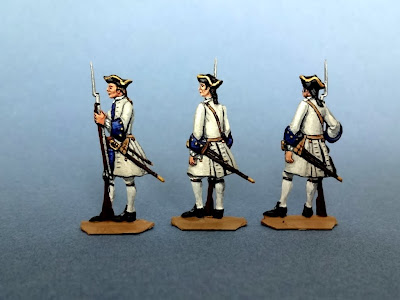 Here is most of the command group. Interesting that the standard bearer on the right really is 7YW and an elegant Ludwig Frank engraving which outshines the others.  Not sure if Neckel or BZ substituted him in here with these earlier troops. Too bad the flag seems to be blowing the wrong way relative to the other standard bearer. 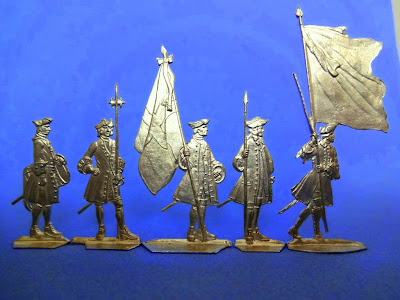