I recently ordered a set of 40mm flats from the venerable Ernst Heinrichsen company in Germany.  This is a 1990's reissue of a classic old set first released in 1888.  It depicts the 1813 Battle of Katzbach between the French under Marshall MacDonald vs. Blucher's Prussians.  The set contains 54 castings, about evenly divided between the French and Prussians.  Both sides have infantry, cavalry and artillery as well as casualty figures.  The set also features several very nice combination figures such as a Prussian Hussar riding down a French infantryman, artillery blasting clouds of billowing smoke and so on. 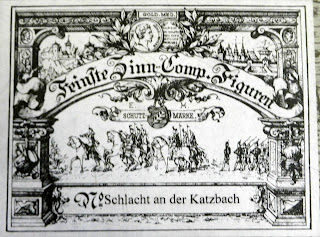 Here are the first figures which I've painted.  Looks like even 130 years ago the poor unglamorous center companies got no love from sculptors.  It's all elites when it comes to the French infantry and I'll be painting them as both grenadiers and voltigeurs. 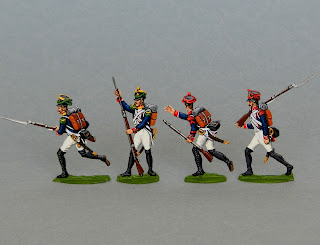 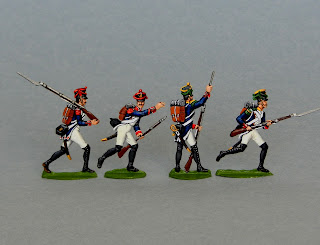 I'm well satisfied with the style of these, toy figures back in the day but to my eyes they were designed and engraved to a high standard which still holds up well.  And, they'll work in with the semi-rounds. For example, the Creartec French Cuirassiers are true 40mm and the Heinrichsens will make good command figures for them, I think.
Posted by Corporal_Trim at 11:19 AM