If you're on the Prince August e-mail newsletter distribution, you'll know by now that more Karoliner molds will be released in "early September". If not, here are the new figures which we'll be able to cast: 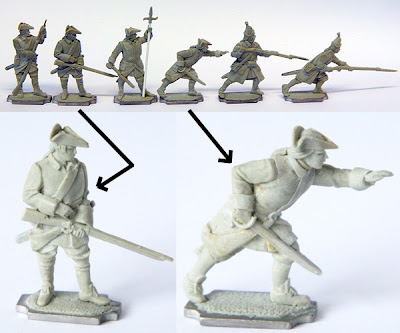 To my eyes at least, they're consistent with PA's track record of bungling their opportunities to really please 40mm semi-round enthusiasts.  On the one hand, it's always great to have new figures. And I do like the look of the two loading and two command figures. But on the other hand, why make yet more Swedish infantry ?!  Holger Eriksson's output was already prolific and arguably more appealing than the new generation of figures.  What was needed was more troops without turnbacks, suitable for their Russian, Saxon or Danish. Or indeed anyone else for the WSS era.

For the Russians, at least there are the two grenadiers in tall miter caps.  But again, my enthusiasm for these two figures in considerably dampened by the clumsy "lunging with bayonet" poses.  How much more useful they would have been carrying their weapons in a march attack pose, or at least a high port position where the front rank of your formation isn't being skewered by the second.

On the bright side, PA still seems to be actively supporting this range of molds.  Sooner or later they're bound to hit some home runs.
Posted by Corporal_Trim at 3:38 PM