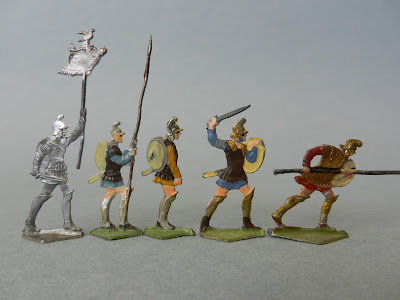 Heinrichsen was one of the great old companies producing large quantities of flat figures in the latter 19th and early 20th centuries.   As you can see in the example, the "factory" paint jobs were of indifferent quality.  While the designers and engravers were highly skilled craftsmen, the painting was largely done by women and children, with quantity taking priority over quality.

These Macedonian infantry figures date to the early 1900's.  I was able to assemble some figures by purchasing here and there when they happened to show up on eBay auctions. I finished the four figures shown here yesterday.  They're the last that I have for my phalanx, 22 figures now stripped and re-painted. A lot of the Heinrichsen ancients were quite naive in style. But given these particular designs are nearly 100 years old, the accuracy is not at all bad. The sarissas are short, but given the figures were made to be played without constantly toppling over, that strikes me as an acceptable compromise. 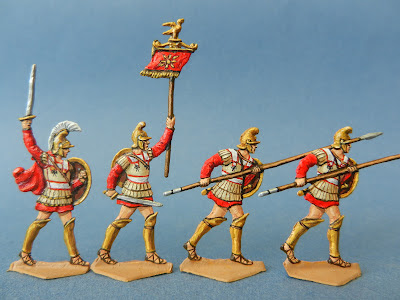 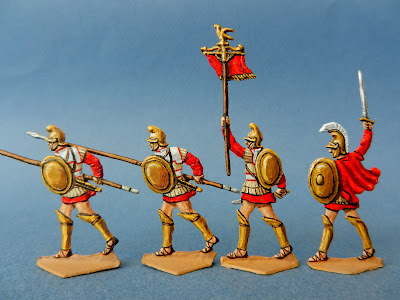 Thankfully, Heinrichsen put these back into limited production in 2011 and I have ordered two more sets. When they arrive from Nürnberg, that will give me enough phalangites to put together a 32-man unit in four ranks of eight.  The sets currently in stock also include these slingers, my repaint shown here sandwiched between two factory painted figures. 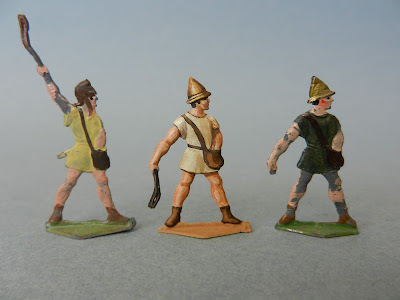 I've now started painting a Lampert war elephant while awaiting the order from Heinrichsen.
Posted by Corporal_Trim at 1:18 PM