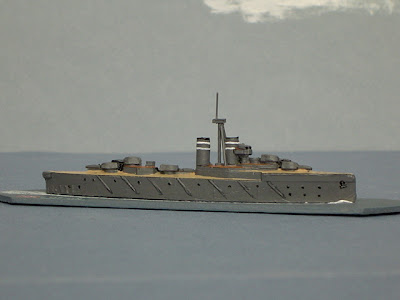 I've been busy painting (and prepping) more models.  Here are three more ships, two of which are missing from the Minifigs catalog list, the super-dreadnought Orion, what is most likely an early scout scout cruiser, Forward, as well as catalog item # 1, Lord Nelson pre-dreadnought battleship .  I must say indentifying the ships with Conway's and the Arco reprints of Jane's 1906/1907 & 1914 has been quite enjoyable. The funnel band detail is courtesy of the 1914 edition of Jane's.  At the outset, I was undecided about painting funnel bands, but decided to do so in the interest of adding a bit of visual contrast to the relentless gray.
﻿﻿﻿
﻿﻿﻿ A handsome ship, the first to mount 13.5" guns.  Aside from repainting, I didn't do much beyond epoxying a casting void on the deck amidships as well as cutting off the wire mast forward and restoring the tripod mast assembly to its proper place between the funnels.
﻿﻿﻿
﻿﻿﻿ The Lord Nelson, toylike but still a good likeness of the original "semi-dreadnought".  I narrowly averted disaster here. I had run out of paint stripper and deviated from my usual brand to something a bit stronger.  I consigned the Lord Nelson and the Dreadnought to the stripping vat, returning a few minutes later to clean them off.  All seemed to go well at first until I noticed to my dismay that despite the hardness of the metal and the relatively short immersion time, the new stripper was etching the hulls.  Poor old Dreadnought didn't survive (save as a template for future scratchbuilding of the early dreadnought classes).  Lord Nelson was damaged as well but I was able to fill and smooth over the worst of it.  Masts restored as well.
﻿
﻿ Not much needed to be done here aside from adding a wire gun for the one which was missing aft.  The casting on many of these ships is flawed, with voids, missing details and incompletely cast hulls in a few cases.

The destroyers I had stripped for repainting could not be indentified, which I subsequently realized was due to a previous owner having amputated the aft funnels, converting them from 4-stackers to three.  I restored the missing funnels this past weekend and they are now in the painting queue for Part 5.
Posted by Corporal_Trim at 8:51 AM