Once I had established that the ships were Minifigs, I contacted Bob Cordery for further information. He was kind enough to share with me what he knew about them, as well as mentioning that there was a Minfigs catalog listing for these ships.  Inquiring further at TMP, member Old Metal Detector was a great help in posting the list on his blog Vintage Wargaming, reproduced here: 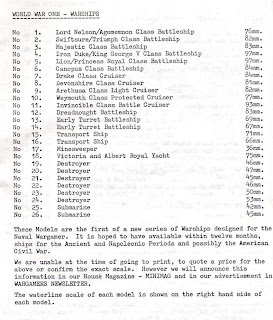