Quite recently I purchased this set of 80 WW1 ships on a UK auction site: 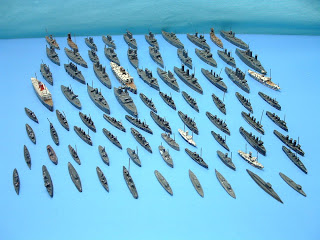 At the time of purchase, I really had no idea who was the maker, nor did the seller give any indication.  But the photos intrigued me, everything from submarines and merchant ships to dreadnoughts.  And all sculpted in a simple and very appealing toy-like style. 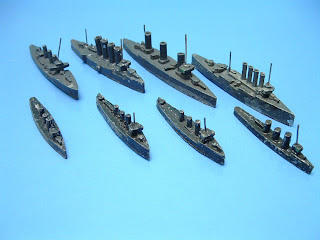 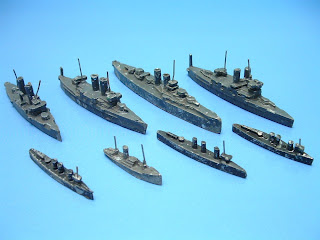 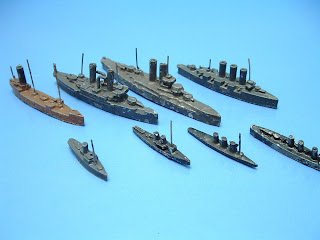 While waiting for my ships to arrive, I searched the internet for clues as to the identity.  It didn't take long to find photos on Bob Cordery's excellent blog Wargaming Miscellany. The thick masts on the Minifigs original castings didn't match the wire masts on my ships but there was no mistaking that many of the castings were the same ones Bob had posted.

Once the ships arrived last week, I found that the previous owner had cut off the original cast-on masts and replaced them with wire.  I can live with it, but would have at least preferred that he'd left the dreadnoughts' sturdy and characteristic tripod masts intact, not to mention refrained from inflicting a few other atrocities such as cutting funnels off some of the destroyers.  The thick paint matters not as I plan to strip and rework the ships to my own standards. There's much to be said for the thrill of the hunt itself, but given my predilection for doing my own painting, letting them remain untouched as a collection doesn't interest me.

I'm very pleased with these ships. Their antique style evokes the days of Fred T. Jane and his Naval Wargame.  Meaning for me that an appropriately old-school rule set is in order for playing with them, most likely Perfidious Albion which carries on the spirit of Jane's old rules in many respects. In Part 2, I'll post some thoughts on the variable scale, the Minifigs catalog list and the more than 1/2 dozen ships in my possession which aren't on it.
Posted by Corporal_Trim at 9:28 PM