Readers of this blog will well recognize these familiar Nurnberger Meisterzinn figures.  I have most of the molds for the Renaissance range, although my collection is lacking a few: the sword-wielding knight,  the foot cavalier (sword or pistol), the wagon set and the nice artillery pieces. But this is most of them.  Yes, they're a pain to cast but the figures do have an appealing toy soldier look.  I also have the color pamphlet Zinnfiguren aus Meisterzinn which shows painted examples of all the castings.

Armored men. I rather wish the tournament knight had come with a detachable shield, making him more useful as an early 16th century man-at-arms, but still it's a good figure. 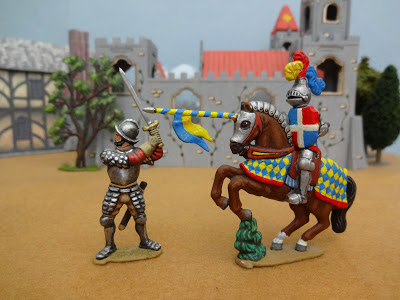 Classic landsknechte although the standard-bearer is more of a hybrid figure to my eyes.  According to Ross MacFarlane the trumpeter can be converted to a pikeman and I can see where that would be an excellent way to get more mileage out of this mold. 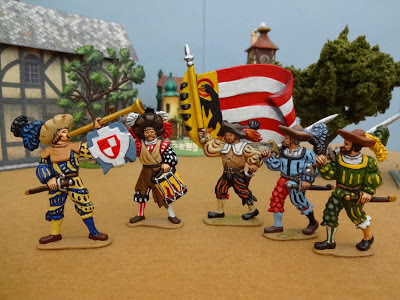 The halbardier is more of a "tweener" who can bridge the gap between the early 16th Century and later, but the musketeer and mounted figure look like 30 Years War, hence the Matthaus Merian backdrop.  The musketeer comes with mold cavities for two heads but he's somewhat oversized relative to the others.  The rider cuts a dashing figure.  Although so far as I know of the 30 Years War, figures bearing lances are usually depicted in 3/4 armor, he appears to have some conversion possibilites. He could be easily become a standard-bearer,  or replace the lance with a musket and you could have a nice dragoon. 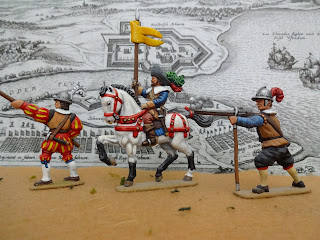 Lastly, although it has nothing to do with Meisterzinn, here's a quick shot of what's in the painting queue. 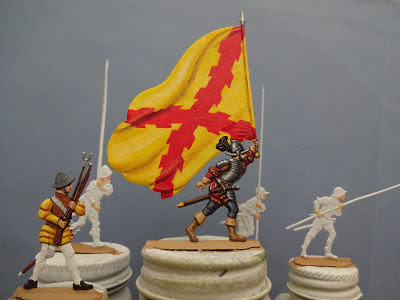 Posted by Corporal_Trim at 5:34 AM