I've decided to begin my personal take on Imagi-nations outside the already well-populated 18th Century, bringing it into the early 19th.  I've been a big admirer of Aly Morrison's Shiny Toy Soldier range since its inception at Spencer-Smith Miniatures.  Which do I like ?  Well, the earlier figures more so than the spiked helmet troops of later in the century.  Do I actually have any ?  Er..., no.  Much as I like them, it's been rather like gazing at that tasty sports coupe through the car showroom window - yes, you can probably make the payments but it's hard to justify the expenditure.  Even Irregular has become a stretch for Americans these days given the weak dollar and overseas shipping costs, and really not much cheaper than STS.

However, I do browse Spencer-Smith from time to time, imagining what fine looking troops could be assembled from the various combinations of pieces for the 1815-1830 era - the apogee of peacock uniforms.  The last visit, I noticed something interesting - Moltzheim heads.  Moltzheim ?  Virgin territory for me.  Took a look at the reference, The French Army During the Restoration 1814 - 1830. 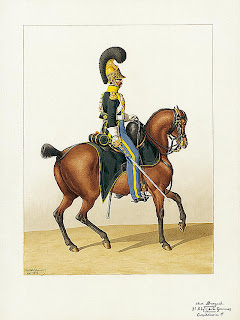 Wow !  I was blown away by the magnificence.  And also inspired with an idea.  The French restoration army looks to me very like Napoleon's.  What do I have sitting long neglected in my collection of 40mm casting molds ?  A few Zinnbrigade French Napoleonic infantry molds.  And I knew that Meisterzinn also made several multi-purpose molds featuring a selection of heads: tricornes, bicornes, crested helmets and shakos.  What else is there ?  Creartec currently produces 40mm Napoleonic era molds as well as 7YW Prussians.

Thus by means of home casting, I could create units less expensively, filling in the gaps with STS, Irregular and perhaps a few 1st Legion here and there.  Yes, not so cheaply as with multi-part 28mm plastics given the price of lead these days, but I just flat out like 40mm better.  And, a glossy toy soldier style for this.  And so it begins. 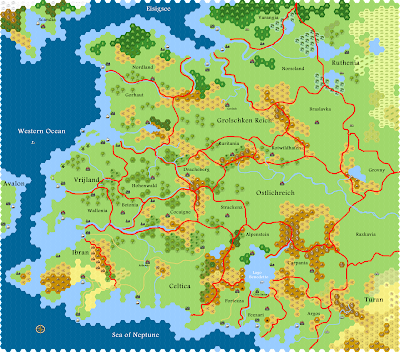 While already embarked on casting and painting the Zinnbrigades, I decided to create a map for these fictional countries early in the game, vs. painting figures in the abstract.  This (as yet unnamed continent) is the result.  Any similarities to Europe are strictly intentional.  The software is Hexographer, available free here:  http://www.hexographer.com/.  The UI is relatively simple and intuitive, no mad CAD or vector graphics skills required.  I did spring for the full version to get more period-compatible icons and the ability to spawn child maps of provinces or battle areas but the free version is quite usable as is.  There is work still to be done in naming geographical features & cities, adding infrastructure (and creating a fortress icon), but I'm satisfied that the basics are covered.

The first troops on the workbench are those of Celtica, looking suspiciously like those of Napoleon and his royal successors. I'm about halfway done painting an infantry battalion of Zinnbrigades, a progress report to follow shortly. The first Creartec and Meisterzinn molds arrived from Germany yesterday and I had a good casting session. Good for the Creartecs that is, downright bad with the stubborn Meisterzinns.  I'm quite happy with the Creartecs, although stylistically they're more like Prince August semi-rounds. Indeed the infantry in particular appear to have a clear lineage to the Schneider molds of olden days (although more detailed), about as old school as you can get.

There you have it, either creativity at work or the ramblings of a madman. ;-)
Posted by Corporal_Trim at 8:10 AM