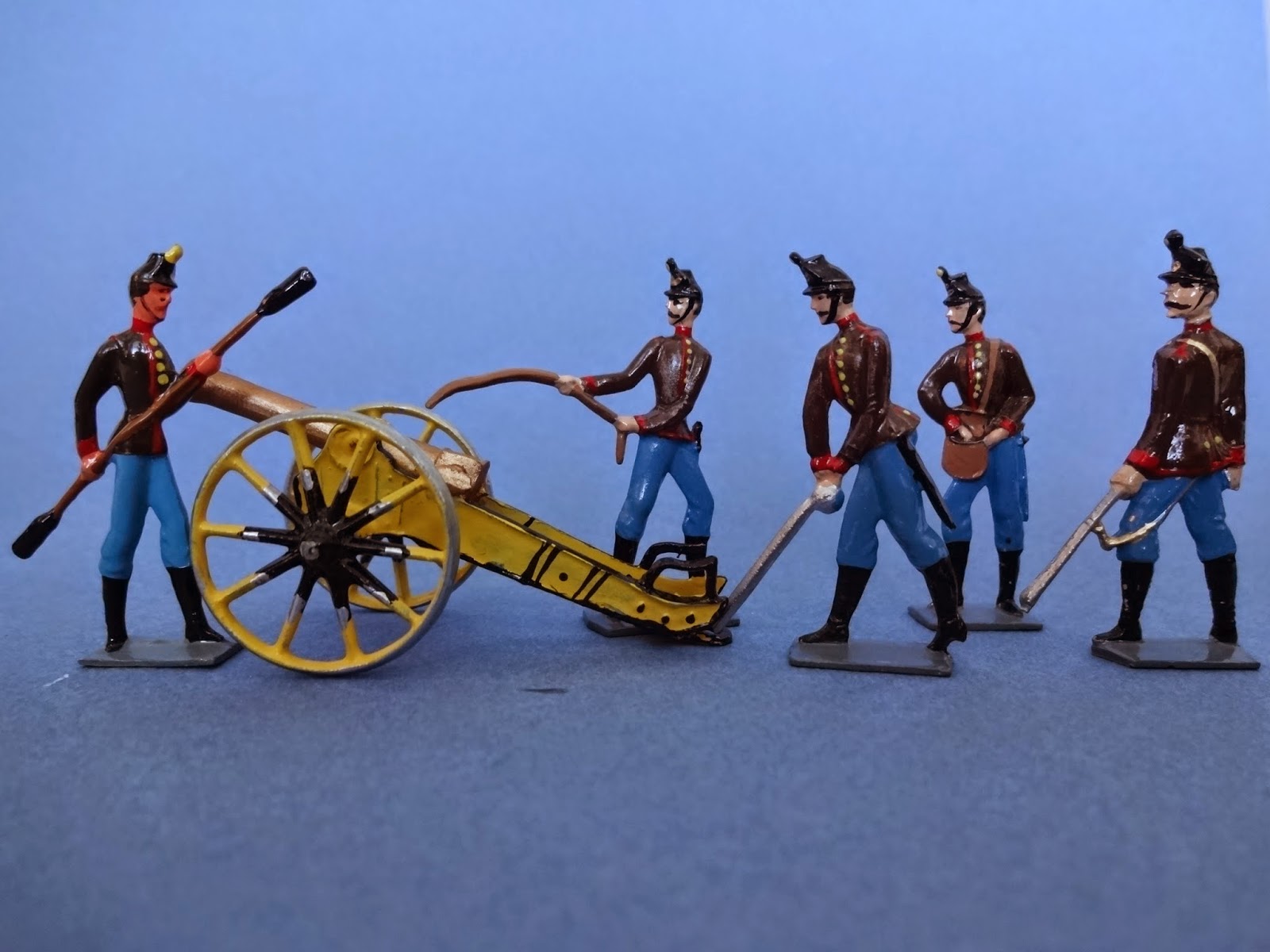 I hope everyone has emjoyed the holiday season, now winding down towards New Years Day.  For myself, it was great to see the family together again.  I also received something ordered from Berliner Zinnfiguren.  Two sets of 40mm figures: some antique Ramm flat castings (started painting these, more about which in a subsequent post) and the set of (pre-painted !) Wollner Austrian artillery shown here.  It's obvious to anyone following this blog that it's all about painting them myself, but I did think this was a charming set in the old semi-round toy soldier style.

The figures are nominally 40mm but very much on the smallish side of that rather elastic scale. 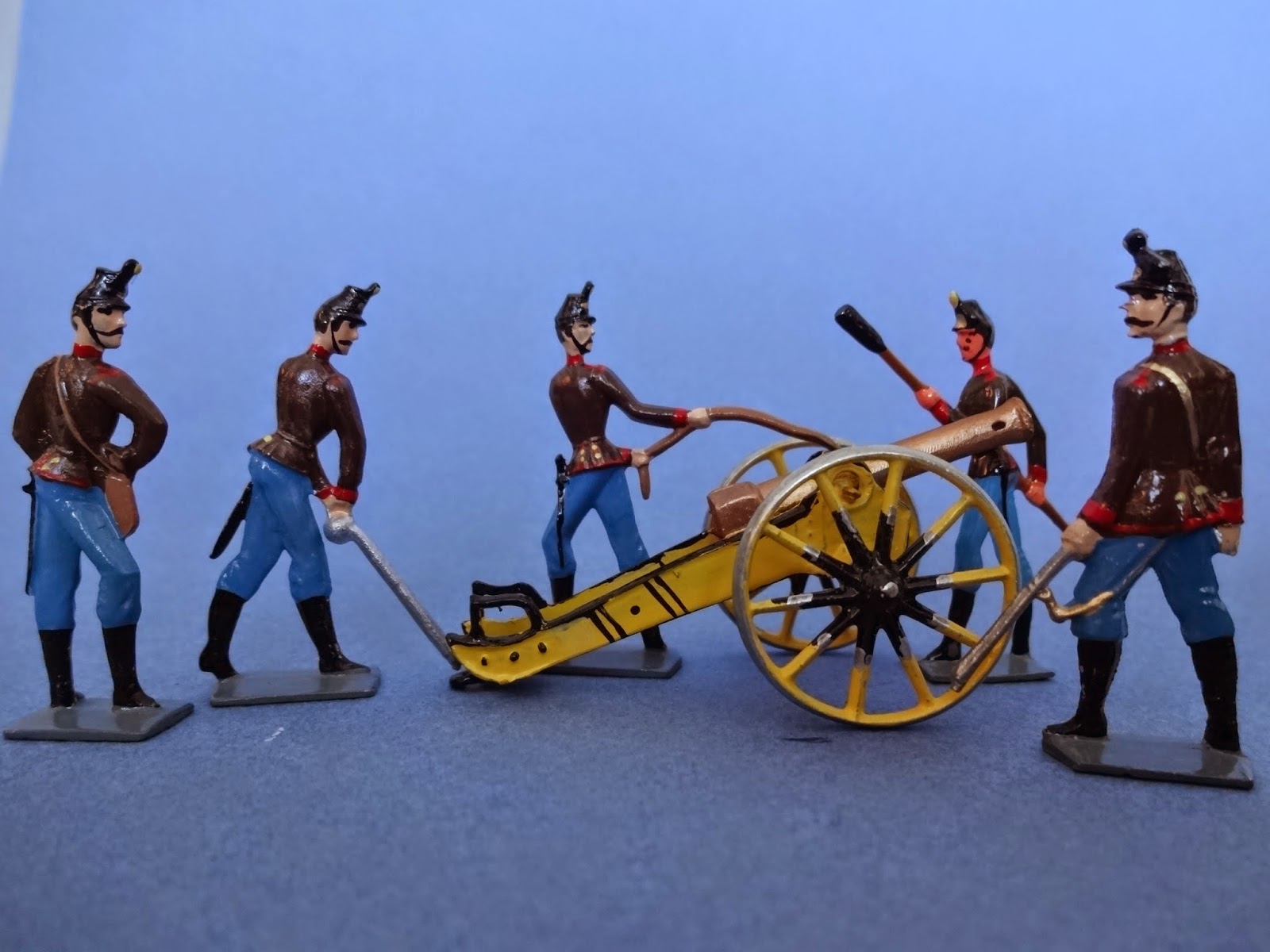 I also painted the last of the Sichart (except for the bandsmen) Austrian infantry.  I turned back the clock on these to ca. 1860 by cutting off the buttons, converting the tunic to the old double-breasted style and painted on the cross-belts.  Here's an example of one of the figures contrasted with the 1890's style which the figures were intended to be. 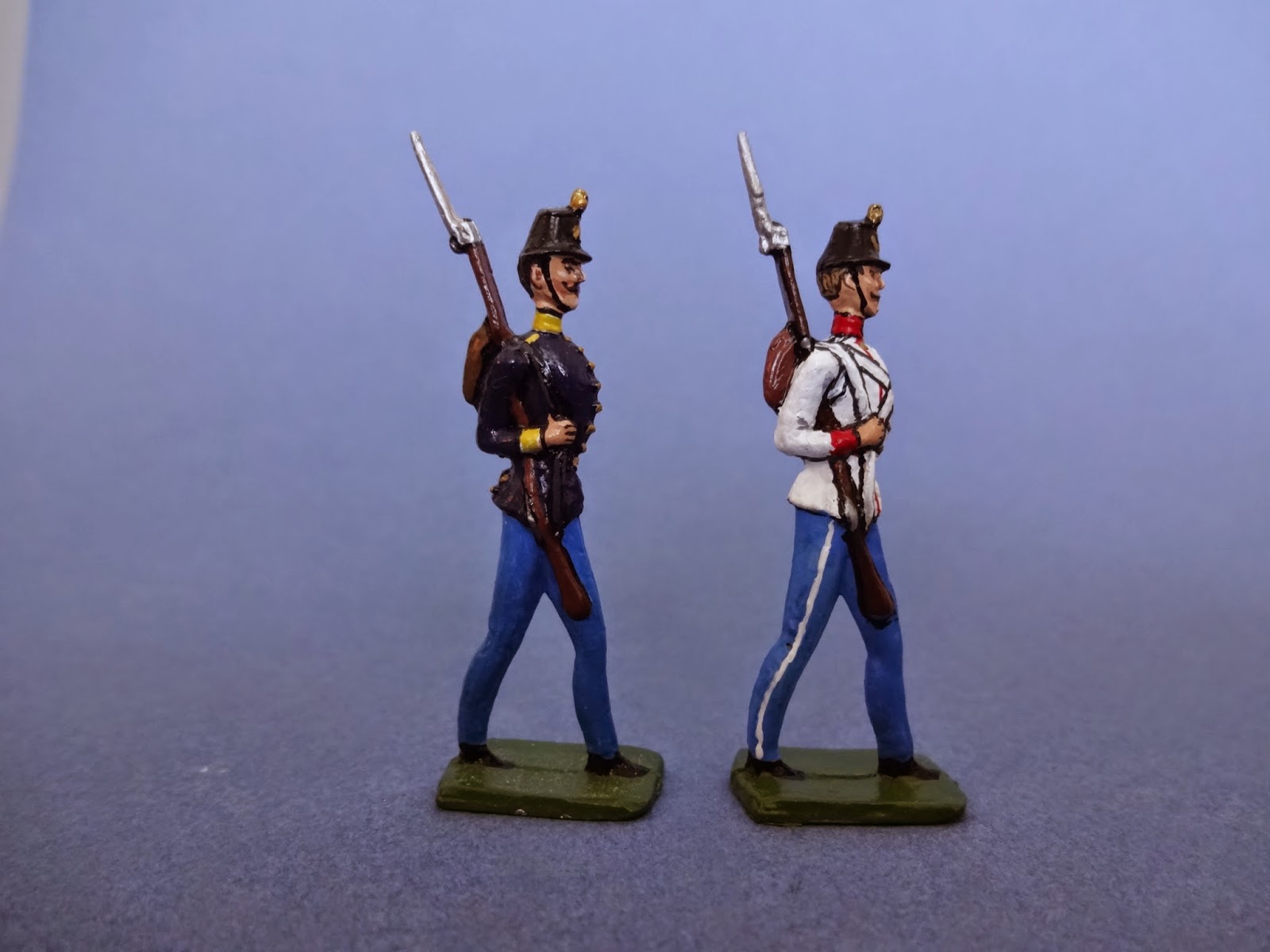 The flag is just okay, the raised detail of the Imperial eagle on the casting would have been more worthy of Josef Wagner composing a march "Under the Double Tarantula" as the resemblance to an eagle is approximate at best. I would probably have been better off just filing it off and painting from scratch but it's at least serviceable. 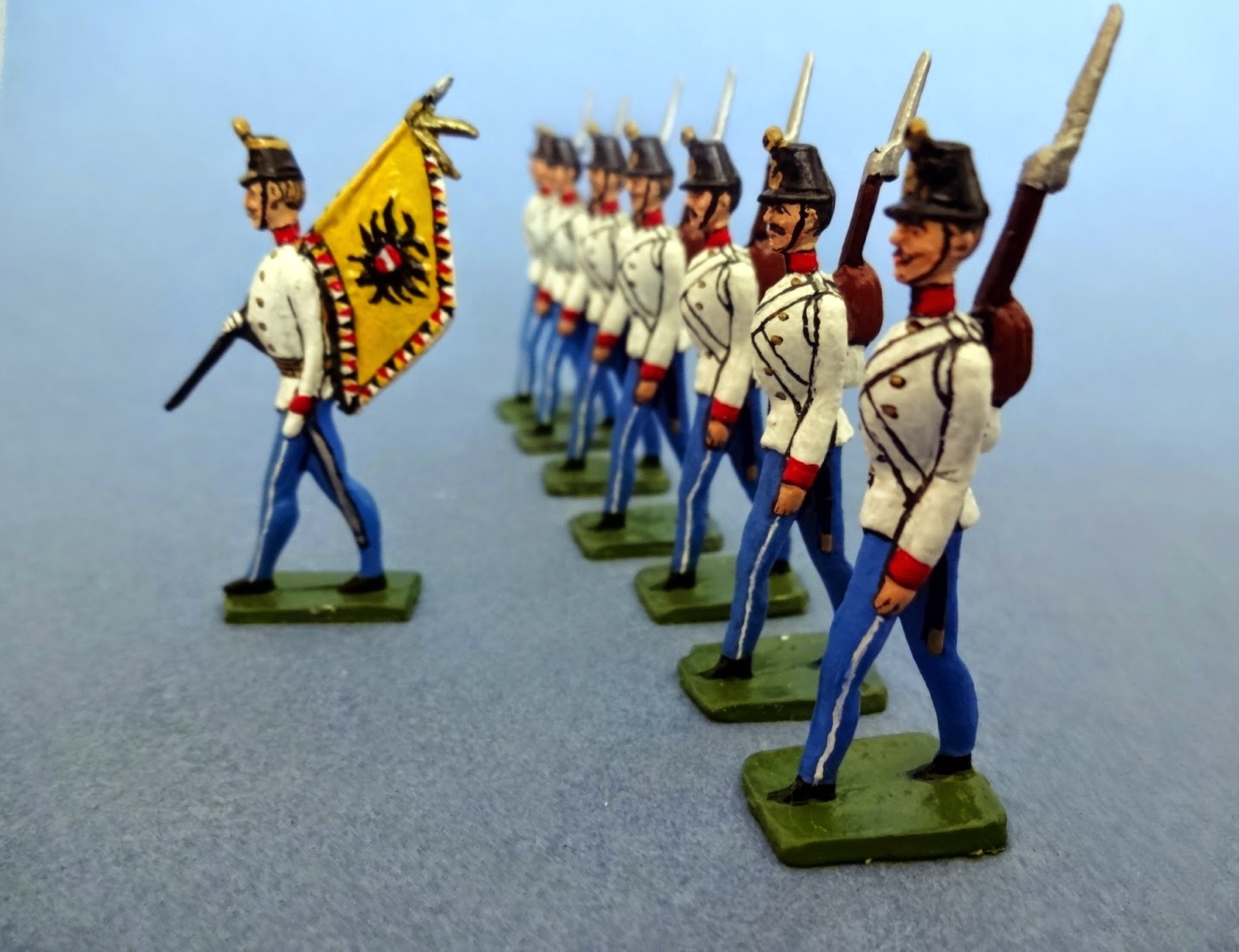 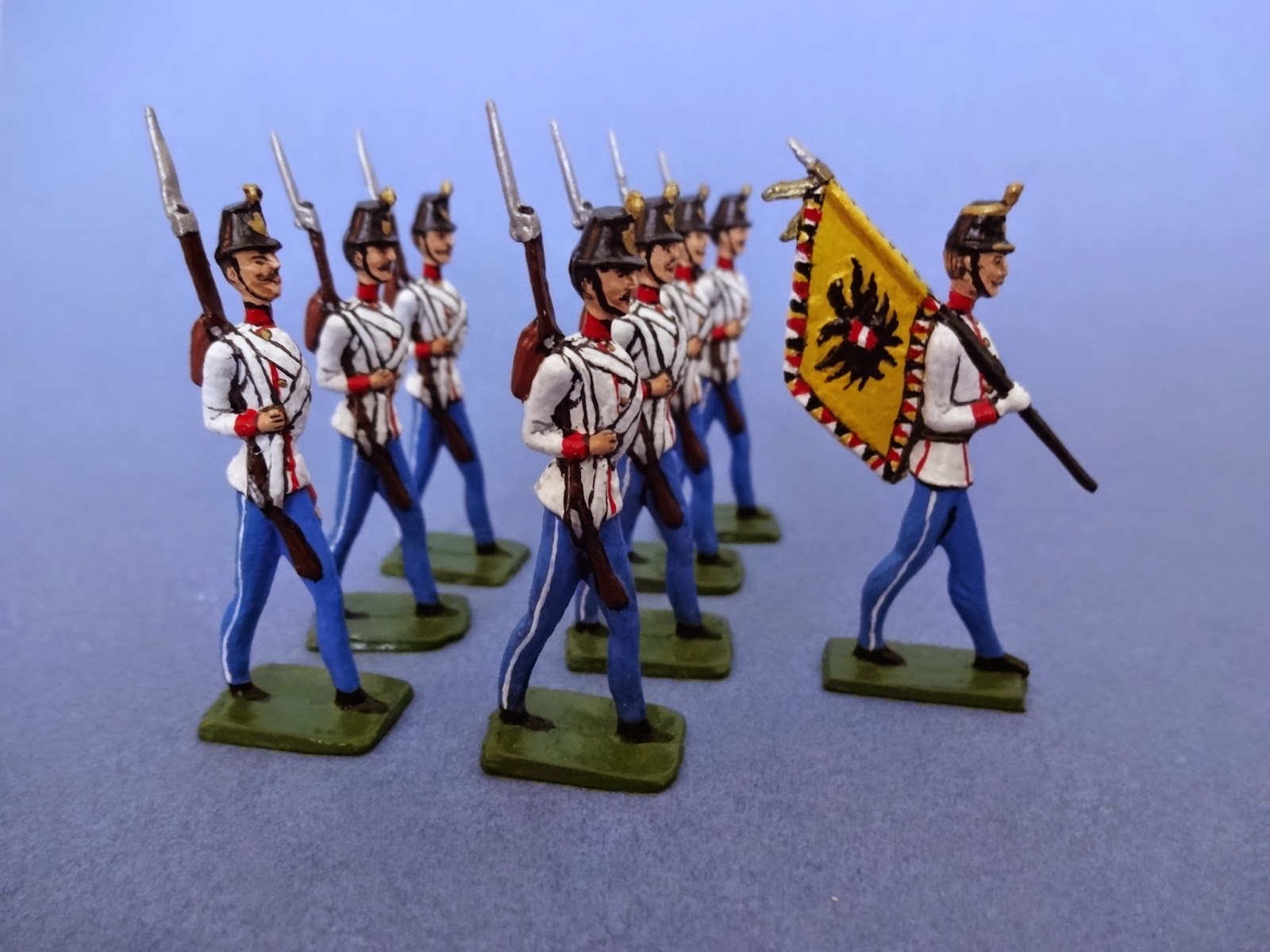 At any rate, this is all I have so any reinforcements will have to be via the mold-making process and I did save one casting for this purpose.  No rush about it though, the figures on parade with their slung rifles are a bit lacking in martial vigor so I think I can do better by the Austrian infantry from some other source.  Nice to have these as a fall-back though.

Posted by Corporal_Trim at 3:17 PM