First, apologies to my fellow bloggers for lack of reciprocal blog comments of late.  I got laid off from my job last week, my company eliminated Northern California R&D production.  And a rather unexpected short-term effect is in play here.  That is, I find myself spending less time on the Internet, not more.  Now today when I logged into the Reading List to catch up on things, Google thinks I no longer have a Reading List.  Probably a short term glitch, I'll try it again later.

So far as the layoff goes, disappointing. I had hoped to continue with the company until retirement at 66, now dropped off a few years short of the finish line but ultimately not surprised to become another casualty of cost cutting measures.  I don't blame the company, sign of the times and I did get a good package which will buy time to find something else and relocate.  For now, it's a tantalizing foretaste of retirement, with more time to paint and ride the bikes (road and mountain), as well as support my wife through the exhausting travails of chemotherapy.  Of course, I'll need to be a lot tighter with the figure and book purchases, no doubt a good thing. And atone for 25 years of undisciplined hobby clutter with eBay selling, something I dislike but no longer have the excuse of insufficient time to manage it, and of course the extra cash will come in handy.

On to the infantry: 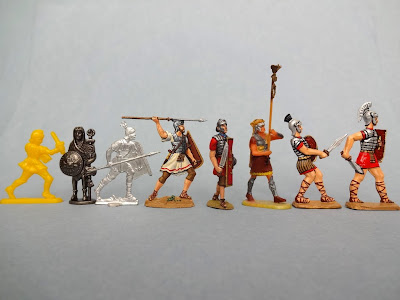 The comic book Romans don't fare well posed next to the traditional flats but at the very least the archers and oddball slingers will come in handy. On the other end of the spectrum we have Ideal.  The figure on the right just looks oversized relative to the rest, but the variance between figures could possibly be mitigated by means of thicker and thinner basing as the case may be. 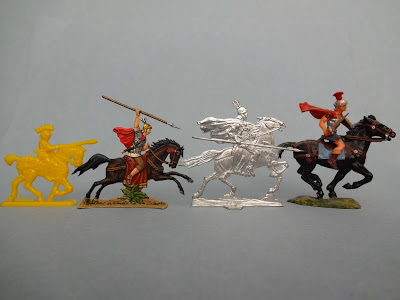 Clearly the undersized comic book cavalry won't do.  It's interesting that the scales of Spenkuch and Heinrichsen reverse with the cavalry, but they are stylistically compatible so long as kept in their own formations.

So far as maintaining a consistent aesthetic goes, it will be in the flat and semi-flat style. Meaning Irregular and Elastolin (despite their undeniable appeal) are out, although it remains to be seen whether flat ballista/scorpion crews could ever be found in 40mm.  The Spenkuch figures don't show to advantage here as unpainted castings but they are superb, to my eyes the best thing Spenkuch ever did.  I'm painting some now, so should have a post up soon about them.
Posted by Corporal_Trim at 9:07 AM