Finished these two figures over the weekend.  First, took a shot at converting older series Mould # 41 to a French dragoon. For this, GNW Mould # DK-101 served for the donor head, from the grenadier.  I filed this down a bit to form more of a stocking cap, also converted the turnbacks to a full coat. 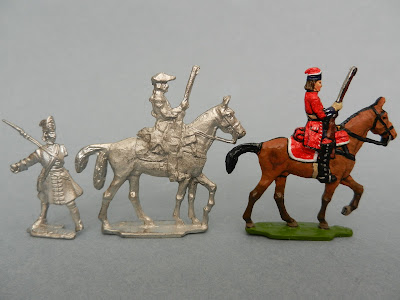 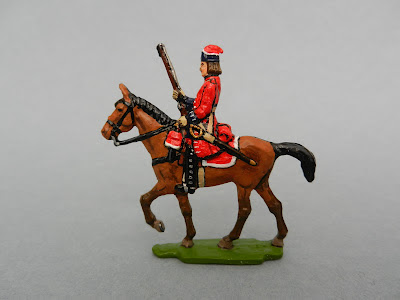 Not too bad. The cap isn't quite right, probably need to file down the top a bit more and extend the stocking portion.  This head would be good for a Spanish cavalry figure as is, I think.  I'm also wondering if the head swap is really necessary at all for a somewhat later French army, ca. War of the Polish Succession. Some of my sources show the French dragoons wearing tricornes as often as not.


Next we have Mould # 12.  This officer seems to me quite possibly intended to represent Charles XII, in any case he's certainly attired in the plain Swedish style. My idea was see how he looks converted to a general in richer contemporary dress.  Hence the Green Stuff periwig and full coat instead of turnbacks. 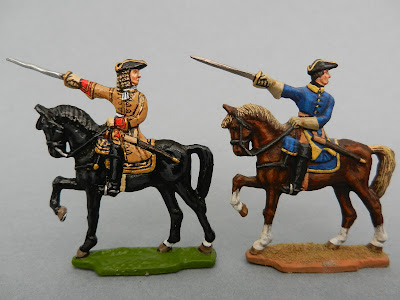 Yes, I'm already waffling on the GNW project idea. ;-)  First, I already have some units painted as French vs. starting from scratch painting Russians.  Secondly, I won't have to deal with pikes if I steer clear of the GNW.  Next up, the "Kropotov" cavalrymen.
Posted by Corporal_Trim at 9:03 AM