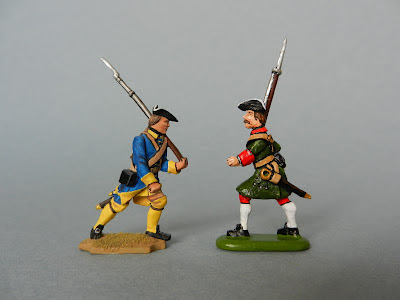 One pleasant by-product of starting a blog has been the interaction with people from around the world who share the same enthusiasms.  Amongst those contacts, I value my recent acquaintance with John Bertolini: wargamer, talented part-time sculptor and full-time gentleman.

Recently John and I fell to discussing what we'd like to see new in the world of semi-round toy soldiers. I said it would be great to have some enemies to oppose Holger Eriksson's host of GNW Swedes, the Karoliners.  No question the Karoliner series is great, the uniquely styled creations of a master. Problem is, they make fine Swedes but if you intend them for use as soldiers of other armies, it's inevitably going to involve some compromises.

John reckoned that he had the same desire to see some 1700 era troops attired in full coats without turnbacks, suitable for just about any other army. And, he has the sculpting chops to do something about it.  Now less than three weeks from the discussion, I have received his prototype figure, kindly offered to me for a test paint.

Naturally, I've painted him a Russian.  I like the look of this soldier, with a vigorous and pleasing march-attack pose. No doubt John has improvements in mind for any subsequent figures, but I think he's gotten the essentials down, right out of the gate. 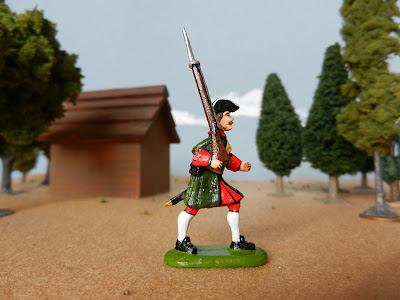 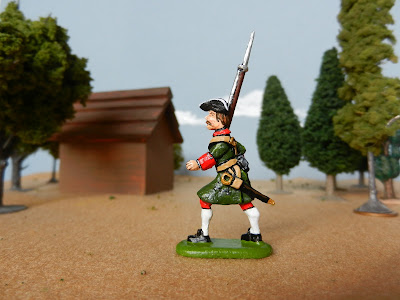 John hit the sweet spot for the semi-roundness, his figure below sandwiched by an original HE grenadier left and more fully rounded musketeer of the later Prince August 900 series right. 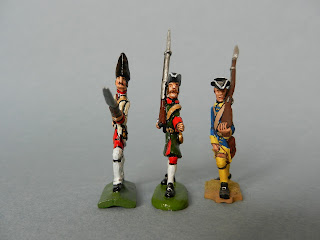 Posted by Corporal_Trim at 9:06 AM