Finished painting the first pack HWG-Modelle Austro-Hungarian infantry figures over the weekend.  Although the figures were sold as unpainted castings "HWG-Modelle", judging by the 38mm size and antique toy soldier style, I'm fairly sure they are Wollner figures.  Wollner dates to the late 1800's and they're still sold by Kober Toys of Vienna. But only as painted sets, so far as I know. 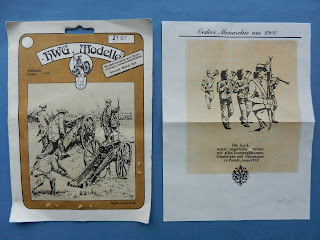 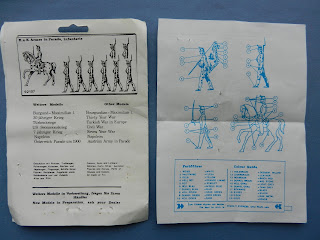 "New models in preparation" ?  I only wish all of this stuff was still in production (Oh yeah, Turkenkrieg !), but I've been able to find nothing on the web about HWG-Modelle. The packaging looks pretty dated to me, perhaps sold new in the 1980's (give or take a decade).  I purchased these sets from the Flohmarkt section at Berliner Zinnfiguren. 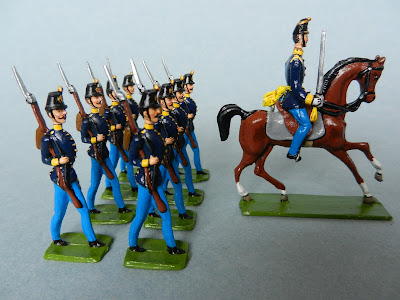 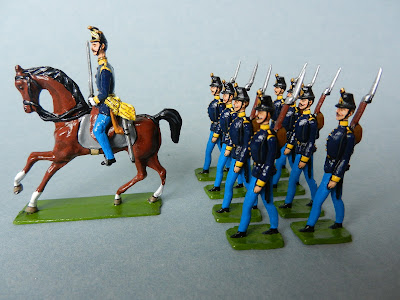 The foot are easy to paint quickly on account of the slim, semi-round style.  The cavalry are also toylike but more rounded.  The riders are cast with their saddles and have to be glued onto the horses.
Too bad there's not of enough troops in this first group to field a battalion.  However, I have another identical set on order, as well as infantry musicians on parade (containing the standard bearer). Between the two, there will be 18 foot figures, which will have to suffice.
Posted by Corporal_Trim at 10:28 AM